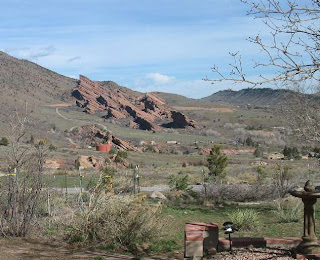 Can't have that snowy scene still up when spring is officially here! So here's the view for today. Blue skies, a little green showing on the ground, and it's a balmy 68 degrees out there this morning. We've actually been pushing up near 80 degrees a time or two in the last two weeks. Here we go into a whole 'nother seasonal cycle.

I've been getting out more, so in the next few days I'll be able to report on some local field trips and other happenings out there. See today's previous post, if desired, for the nuts and bolts details of why FF has been dormant of late.
Posted by SLW at 10:58 AM 1 comment:

Foothills Fancies is starting a whole new year today. I thought we'd have our 100th post up by now, but on March 5th, my computer decided not to cooperate with that plan. For the statistically inclined, this and today's next post are officially the 99th and 100th, but as four are still sitting in drafts, that means we have only reached 96 online entries.

For an entire fortnight I have been computer-free, at least at home. I've gotten to the library a time or two, or taken advantage of brief email checks elsewhere, but for the most part have been cut off from technology. It was an intriguing interlude, but I wish I could report it was productive. Monday night, the good old Vaio came home and got reconnected, so now I'm reconnected with the electronic universe as well. No data was lost in the big box's sojourn with the Geek Squad.

So, did I organize my office? Oh, puh-leeze! Catch up on my housekeeping? Nah... I entertained, most notably a cat, apparently feral, who goes to the vet tomorrow for the appropriate surgery. I did some historical research, especially on old aerial photos. Nothing too exciting, but I did get out on a few hikes that will be grist for future posts. Spring fever is definitely underway-- I almost planted something yesterday!

For those who've had trouble (including me), apparently the "NEW Blogger" enabled comment moderation. It's off now, so you are again free to comment. Thanks for patience!

[Footnote to anonymous commenter on "Here's the Frog": The Jeffco Hikers blog was deleted and I can't get to it anymore. Details for you are on that post next to your comments--or just email me at info@historicmorrison.org, so I can get back to you.]
Posted by SLW at 10:55 AM No comments:

Labels: blogging
Newer Posts Older Posts Home
Subscribe to: Posts (Atom)
Whether we and our politicians know it or not, Nature is a party to all our deals and decisions, and she has more votes, a longer memory, and a sterner sense of justice than we do. —Wendell Berry