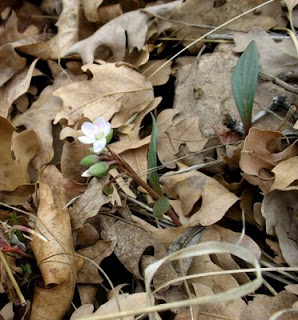 Bee Lady reported Spring Beauties in bloom down on the trail last week, but it took me a few days to get down and check it out! Not that I doubted her: spring wildflowers in February are no big surprise in Colorado, at least at this elevation, and especially not in this very dry winter we're having.

So here, for the record, is Claytonia rosea in full, if unenthusiastic, bloom on February 22nd. (I think the original report came in on the 18th from Bee Lady.) 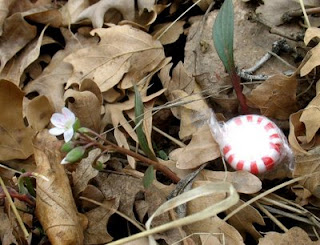 A couple of weeks ago I got my state quarters* sorted out for just such an occasion, but naturally neglected to take one with me! My hiking companion, she with the neighborly fox alerts, just happened to have an appropriately sized object with her, so herewith we introduce the Scale Mint. (I think, though, it's just a little too reflective.)

We know, of course, that this sign is no lasting harbinger, and we still have hopes for a winter yet to come. We have no groundhogs in Colorado, only their close cousins, the marmots, and spring (as I've written elsewhere, in an essay that dates to 1995) is always a tricky business in Colorado, for us and for the plants! For more authoritative proof that this is not a new phenomenon, consider this account by Arthur Lakes, written in 1876:

In Colorado we never know when Spring is come, for one day we have a hot summer day, and the next we are toiling through snow a foot deep. Still there are signs that Spring is nigh at hand. About the first week in February we noticed the buds of the willow beginning to swell, and a rounder outline growing over the skeleton trees of Winter. Our Oregon grape, Berberis Aquifolium, like a little dwarf holly with its burnished leaves still retaining their autumnal hue, began to grow greener, and at the beginning of March to put forth catkin buds, soon to blossom in a cluster of gold. A party who had gone fossil-hunting to Green Mountain brought in triumphantly our first spring flowers, a cluster of large white daisies on a mat of flat leaves, looking up starlike and pure like resurrection beings from the dark soil, beautiful types of Easter. In a sheltered cranny of the rocks they had also found the modest pink blossoms of the Claytonia Virginica.

To update what "springlike" means in February, the thermometer hit 68F (20C) today. Absolutely lovely. Lakes' Berberis Aquifolium, Oregon grape holly, is now known as Mahonia repens or was last I checked; its "catkin buds" are there, waiting but not yet yellow. I did not check for Easter daisies (Townsendia spp.) on Green Mountain, but it's completely likely they too are out on the south slopes. My local patch is showing only buds. His Spring Beauty name, Claytonia Virginica, applies these days only to the eastern species; we have three species, of which C. rosea is the foothills version here.

——
*See the Lacy Lichens post below for appropriate botanical use of state quarters in a serendipitous discovery I made about 3 years ago. This one even recorded the date! Unfortunately this best example was my first and also my only use, to date, of this excellent aid.
Posted by SLW at 4:18 AM 1 comment: 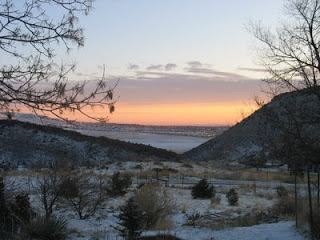 This quiet morning photo takes in a scene that, yesterday, was rather more busy. This version was taken on the 11th of February, looking just north of east toward Denver, and represents the norm... But looking out yesterday we saw a coyote, no two, just outside the fence between our yard and the neighbor's driveway, midground here.

That merited a closer look, as the chickens were already out. We watched as the coyotes puttered around for a minute, then dashed across, exiting stage right, which is left in this photo. One... two... three of them, going west about as fast as they could. Pretty impressive! And, thankfully, none of them carried a chicken!

For several days, a neighbor has been calling with reports of a fox in her yard, heading for ours. A quick dash to look has revealed nothing each time. Until yesterday. This time, she was a little more alarmed—"he's in your yard!" I stepped out, still nothing, it seemed at first; chickens all huddled quietly—until a red streak dashed from beside the chicken's gate to the far corner, up and over the fence, and (again) away to the west. I don't recall red foxes being so big! But he carried no afternoon snack away with him.

The dogs, of course, went berserk, but by the time they were allowed to scope out the yard, it was far too late for a close visit with their friend. 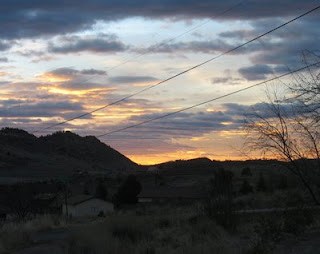 This morning it's quiet again, as this view to the southeast testifies. I find myself looking out to the north, the usual view, every few minutes, but only one hungry cervid and several hungry corvids are hanging about. I fear the dogs and I, however, will be on alert all day. A post on wild canids may be ahead of us, especially if the camera is ever at hand when opportunity strikes.
Posted by SLW at 7:09 AM No comments:

Thursday was "Honor-an-Invertebrate Day" over
at Life Photo Meme. You oughta pop over
there and check out the adorable little
octopod they found! 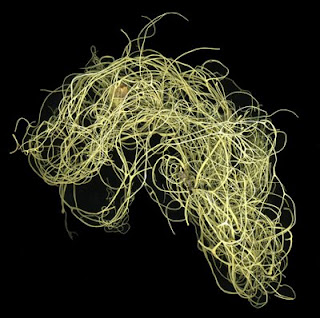 Meanwhile, here at Foothills Fancies, I'm just catching up with the previous week's challenge: Lacy... Something alive, and lacy. We're going to try it with lichens. First up is this specimen of Usnea cavernosa, in the group sometimes called "beard lichens." The genus Usnea is characterized by, among other things, the presence of usnic acid, a lichen compound that gives it a distinct coloration. Click to enlarge photos for a better view.

Beard lichens are fruticose, that is, 3-dimensional or, literally, "shrubby." This species is long and pendent, but look for shorter ones on tree trunks. Here in the Rockies, they are very common on conifer bark, for example. U. cavernosa is, in fact, the only pendulous Usnea I've ever seen or am likely to see, unless I get to the Cascades or coastal northwest, where the others live. You can see more long Usneas at Lichen.com, in the portrait gallery. That site is, by the way, a terrific reference for lichen information and photo-IDs. (The image above is a direct scan of the specimen, not a photo.) 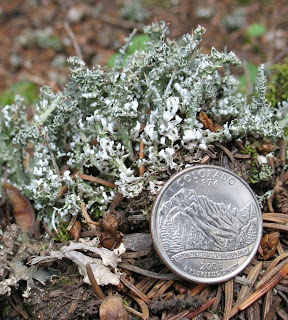 This cutie is another favorite of mine, though I haven't figured out the species and don't expect to. (My best guess is C. squamosa.) I'm happy knowing that it's a species of Cladonia, and in this case, lacy is in the leafy squamules at the base of the critter. Cladonias are two-part lichens, often with upright structures called podetia. In this one, a slight suggestion of podetia can be seen, though those too are covered with squamules.

Lastly, a more typical lichen (or two) of the foliose growth form, Parmelia sulcata, lower right and center in this photo. Very common on moist rocks, where it often consorts with mosses, P. sulcata is steely gray when dry, somewhat more blue-green when damp, as here. The smaller frilly gray lichen around its upper edge is most likely a species of Physcia or perhaps Parmeliopsis. 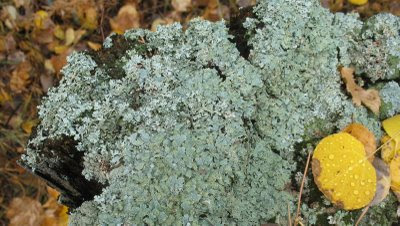 Few lichens have real "by the people" common names, though specialists have been making up some just to make it easier for the rest of us to deal with these fascinating beings. Parmelia sulcata, for example, may be known as "hammered shield lichen." If you enlarge the photo, you'll see the hammer marks that suggest that name. The genus Parmelia in general is called shield lichens, but sometimes these new common names can be more cumbersome than the Latin binomials!

Who could resist these guys? With their variety of form, color, texture, and habitat, and more than 17,000 species to keep us guessing, lichens are a great way to make it through long winter months when other "plants" are dormant.

Labels: lichens
Newer Posts Older Posts Home
Subscribe to: Posts (Atom)
Whether we and our politicians know it or not, Nature is a party to all our deals and decisions, and she has more votes, a longer memory, and a sterner sense of justice than we do. —Wendell Berry