Hello from Pittsburgh, city of 1700 bridges! (I think that's what the sign said as I was driving in too late last night and getting lost somewhere in or under one of them.)

The 95th Annual Meeting of the Ecological Society of America is taking place here at the Conference Center, but only two bridges are visible from its deck overlooking the Allegeny River. Here's one of them, looking downstream toward the Monongahela River, which is just around the corner somewhere. 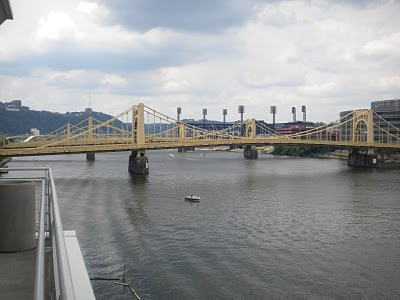 Actually, I think that photo captured two or three of them! And here's another one, looking upstream. 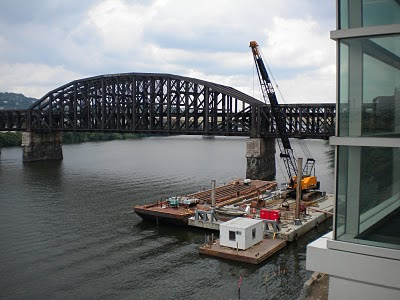 Two down, 1698 to go! Actually, about 5 more are visible from the hotel room, so that trims it down a bit.

We also have boats. Kayaks, Mississippi-style tour boats, speed boats, and so on. Here are the human-powered ones. 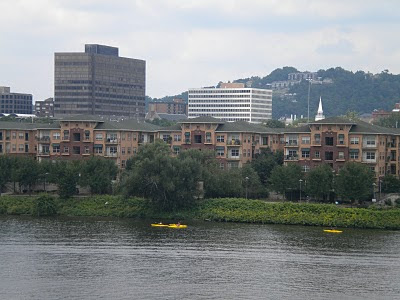 Speaking of human power, the Convention Center encourages exercise, especially in the form of lots of walking! It's also, to get a little eco-note into this post, an LEED-certified green building. In fact, they say the whole town is going green, now that it's over its coal-mine-and-steel-mill past. The Westin Hotel is also doing its part for the environment: They even turned off one of the two shower heads in the hotel room so you have the option of saving water, if you don't turn it back on.

Back at the Berry-Go-Round, Jade at Brainripples.com has done a fabulous job as host of her first plant carnival. Too rich for words, you must explore it yourself! Be sure to allow plenty of time for the diverse offerings she's rounded up...

Labels: travel
Newer Posts Older Posts Home
Subscribe to: Posts (Atom)
Whether we and our politicians know it or not, Nature is a party to all our deals and decisions, and she has more votes, a longer memory, and a sterner sense of justice than we do. —Wendell Berry