Drama unfolds on a short hike today with Book Lady. I think I saw the spider first, curiously immobile in a crevice. Then the wasp. Then mayhem. Eventually we left them to it, so I'm afraid I can't tell you the outcome. Perhaps a duel to the death; perhaps capitulation with the spoils to the victor.

First, borrowed from Wikipedia courtesy Blazeblaze, the participants in today's event looked a lot like these two below. Due, in part, to the fast action, the rest of the photos (mine) will be a bit more blurry. 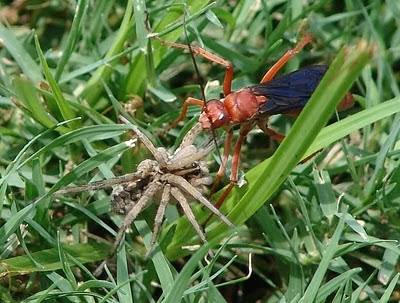 My first thought, when I see an unusually large spider with an unusually large wasp, is "Pepsis" (for the latter). Turns out Pepsis, the tarantula hawk, is even larger than these gals—a full two inches (50 cm). And Pepsis has an opposite fashion scheme, a blue-black body and rusty wings. 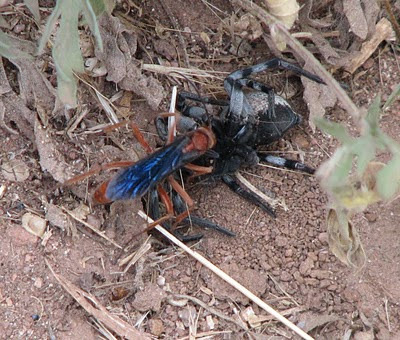 It's true, this time even I know that wasp is a gal. She is, after all, engaged in feeding her family, or rather, expected family. She is also most likely Tachypompilus ferrigineus, a spider wasp of a different color. Spider wasps, of course, see spiders as material to be stung (as this one is) into submission and stuffed into nests where one can lay upon them an egg, which will hatch into a larva that then devours the providentially provided sustenance. (She is about 35 mm long; the spider is probably 50 mm.) 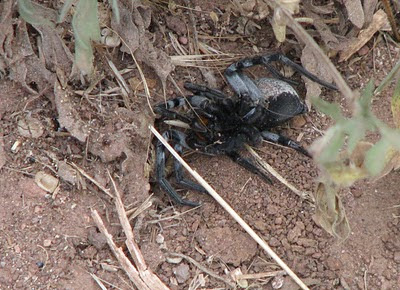 If it were only that simple, she may be saying. As I mentioned, the spider was in a crevice. Above she's on the trail, having arrived there under the influence of gravity and some unknown propellant... 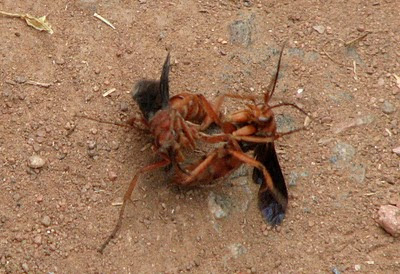 Which turned out to be another wasp, with clear designs on the same spider. In the ensuing brawl, it was hard to keep the two combatants straight, and impossible to tell which was the original possessor of the prize. 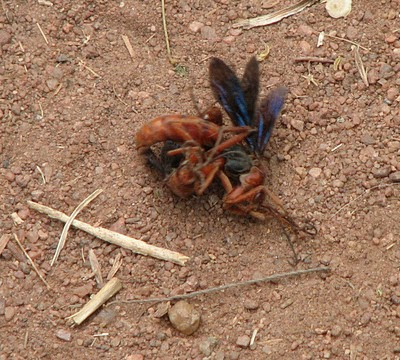 I tried to separate them a time or two with a walking stick but they only had eyes for each other and couldn't be distracted. Eventually we decided not to risk attracting stings, and left them to sort it out. Whatever the outcome, we have to suspect it ended badly for the spider.

Labels: insects and spiders
Newer Posts Older Posts Home
Subscribe to: Posts (Atom)
Whether we and our politicians know it or not, Nature is a party to all our deals and decisions, and she has more votes, a longer memory, and a sterner sense of justice than we do. —Wendell Berry