It was a pretty good year for me, all in all— a new job I loved, congenial boss, lots less stress, mellow home life, what’s not to love?

Unfortunately, that’s not the 2007 I want to talk about today. In the course of January’s big move (switching the putative “home office” into the guest room and vice versa), one of the things that went “out with the old” was my (mostly*) trusty Sony Viao. In with the new was a laptop I’ve used sporadically for a year or two and never learned to love. Monitor and usable keyboard stayed, though, and because “everything” is on external hard drives, the transition was as seamless as possible.

(*with the exception of a couple of killer malware infestations) 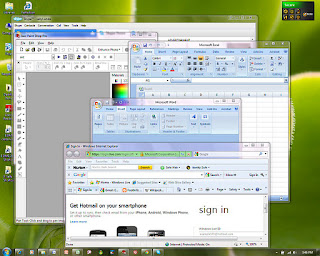 I can’t tell you how much I hate this program.* Some may say it’s a sign of stick-in-the-muddedness, but I am willingly learning lots of new things— getting along fine with the new Thrive and its various interfaces; trying out awesome new culinary tricks; coping, more or less, with new “procedures” at the office; even changing my eating and exercise and work habits. Honest! Dealing with my office and clutter, for goodness sake!

*But I’m going to try anyway.

But, time and time again, Windows 2007 trips me up. Just when I think I’ve got it down, mastering the new “Ribbon” in MS Office, for example, it turns around and bites me in the butt in some surprising new way.

And every time it does, someone on the listening end of my rant will say “get a MAC.”

Perhaps some of you out there are old enough to remember when you had to tell a computer what to do, instead of having it guess what it thinks you want to do. We even had a saying “computers don’t do what you WANT them to do; they do what you TELL them to do!” 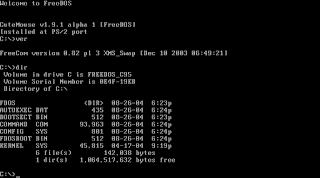 Good ol’ DOS. On days when 2007 seems determined to stymie my every effort, I remember DOS more fondly than usual. In the DOS days, it was possible for someone without a degree in computer science to understand, in a basic way at least, what a computer was actually up to. There were disks, or “platters,” that spun at 3600 rpm, a “motherboard” you could see, little “beans” that added more RAM, and “hard-wiring” (also visible). There were peripherals in those days, and ports in two flavors, and buses and “scuzzies” (SCSI). And an awesome immune system! This nice screenshot is courtesy of Wikipedia which (naturally) has a DOS page. “AUTOEXEC.BAT”— man, that takes me back! Note, please, the complete absence of GUI interfaces, icons, bells, whistles, animated gifs, popup menus, and other nuisances. 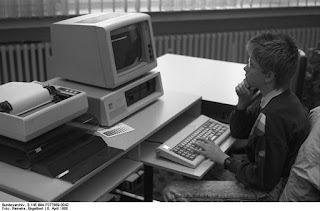 Briefing for those born after 1980: DOS stands for Disk Operating System. Once upon a time, a computer screen was a tabula rasa (sorry, I mean, blank slate; folks born in recent decades may not know Latin either), a black screen on which you could type sweet easy commands (many less than 5 characters long) to get the computer to do things. If you needed the computer to do something really complicated, you put all the commands into a text file called a "batch file" so you didn’t have to type them every time you wanted to perform that string of commands. (Courtesy Bundesarchiv, B 145 Bild-F077869-0042 / Engelbert Reineke / CC-BY-SA, via Wikipedia.)

Some bigger programs were developed to help, with names like Lotus 1-2-3 and Wordstar. They successfully performed functions akin to those of MS Office, entirely without resorting to a Ribbon! Wordstar, in particular, used a bunch of keyboard shortcuts that made things easier. Wheee… In about 1985 or so, someone said “Don’t bother to learn those; they’ll be obsolete soon!” Guess what? It’s been almost 30 years, and we’re still using the exact same commands! Even Mac has had to adopt them.

Big MAC is not the answer

Then the Steves decided it’d be better if we didn’t know what was going on inside that shiny metal box. Or that we shouldn’t have to be bothered with all that. In the name of accessibility and freedom, they relieved us of responsibility and made the computer a true “black box.” Those of us who think more verbally than visually found ourselves to be icon-impaired and consequently handicapped in our ability to function. 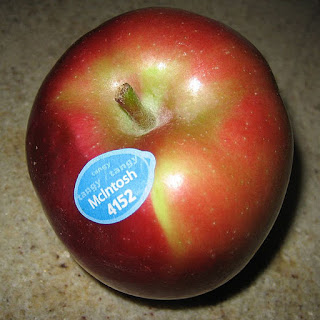 As others have noted, the success of the Macintosh Apple made all other fruits pale in comparison. It was no longer enough to be juicy and sweet, now you had to look more and more like the rosy red apple of temptation. And Microsoft was nothing if not adaptable: with every generation, its operating systems got “easier,” more “user-friendly” and “intuitive,” and its GUIs grew gooey-er than ever. (McIntosh apple image, not to be confused with Macintosh Apple. Lars Zapf at Flickr, again via Wikipedia.)

The frustration grew accordingly. But like all caught in the throes of evolution, one must adapt or die. And so we struggle on, slowly coming to understand that a “bucket” means “fill,” or “A” means Font but “B” means Bold. And a funny little brush now means “Paste.” I haven’t seen a paste brush since the bathroom had wallpaper!

Has my life improved?


All this is not to say I’m ready to go back. I do understand we can’t. I don’t covet the 10 MB hard drive of my original XT (yes, total capacity; now I have images bigger than that!) or the reassuring click of the XT keyboard I once thought I couldn’t live without. I’ve learned to adapt, just as I did with losing the IBM Selectric that was also once indispensable.

Life goes on, and by and large, computers are more fun now. I love having Wikipedia at my fingertips; love being able to email and blog and tweet and doctor photos and keep up with what other people are doing. I love the vastly expanded learning capability that computers and the internet offer, although I wonder, now and then, if we haven’t outsourced our brains. (Yes, I still keep whole poems, and phone numbers, in my head. I’m old school.)

Maybe someday, I’ll be able to say “how will I live without Windows 2007?” But not today.

A Word about Rants

We all have something we can rant about. Here are a few of my “recent favorite” rants:

Wow, "rant" is even in the title of that last blog. And they have a cocktail hour! 'Scuse me, I'll be back later.

After all those clear, warm days (even to 60s on Thursday; 15s C), clouds and white-out conditions rolled in Saturday afternoon. Left us with only a few inches/cm, though. Sunday (1/8) arrived bright and clear, but white and cold. 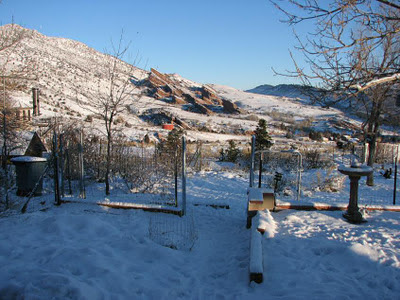 This is the first "view" north of the new year, and an appropriate one. With two nice snowfalls in December, our White Christmas was assured, as well as some relief for the trees and shrubs that depend on winter moisture. Sad to see other parts of the country are still waiting. Need snow? Check out winter in the Lanark Highlands, courtesy Kerrdelune. Her photo today is even more lovely.

If your wintry days need brightening with blossoms, visit the December Berry-Go-Round, hosted by the Roaming Naturalist.

Why I'm Not a Scientist

I heard about the Fibonacci series and said "That's cool!"

Incredible story! HT to Botany Photo of the Day! 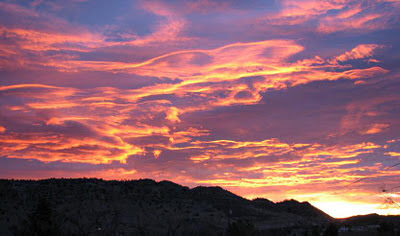 This morning was not quite this garish; softer and more delicate really, to my eye. The Sun is just barely, not even visibly, advancing northward from his extreme position, just as last year. Another swing around the Sun.

All the days of this year have been glorious thus far, with clear skies day and night, a waxing Moon, Venus in the evening, and Jupiter (still working his way across the southern sky) now high at prime viewing times. At dusk, Orion will be charging up from behind the hogback barrier above, as the Winter Hexagon hangs above and around him.

Labels: sun
Newer Posts Older Posts Home
Subscribe to: Posts (Atom)
Whether we and our politicians know it or not, Nature is a party to all our deals and decisions, and she has more votes, a longer memory, and a sterner sense of justice than we do. —Wendell Berry