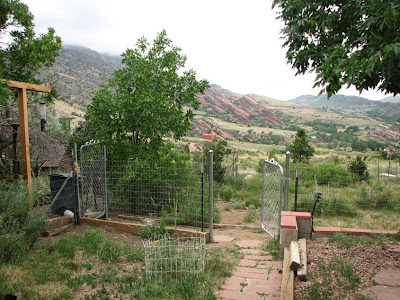 When anything under 90 degrees (32 C) feels cool, you know you've been IN it. Two of the last three days set records; the third, yesterday, might as well have. (38C sounds so much cooler than 100F!) Because it's a challenge to capture the searing heat and stifling dryness in a photo, here's today instead. At a full 40 degrees cooler and overcast, the plants on the patio are breathing a sigh of relief along with my own. We can all smell and feel the moisture in the air, hanging heavy. "10% chance" offers little promise, but at least the heat's off for the moment. 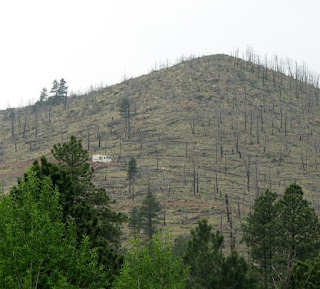 Colorado's two active wildfires are distant. High Park, to the north of us and west of Fort Collins, has now claimed 59,000 acres, 189 homes, and one human life. It has been burning since June 9th and is, finally, 55% contained. We've been awash in smoke here off and on, as the evidence of the fire is liberally shared across the Front Range. Springer, a smaller fire near Lake George, is currently at 900 acres and 10% containment. (Photo, High Meadow burn area, 11 years later.)

It's going to be another one of those years, reminding all of us of 2002. In that June, just 10 years ago, the Hayman Fire burned for most of the month, scorching 138,000 acres and leaving a lasting impression on the people of Colorado. 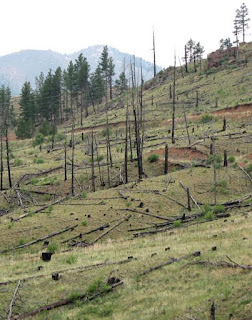 Memories of the earlier Buffalo Creek Fire of May 1996 were brought close to home last March when the Lower North Fork Fire hit in the same part of the county, claiming three human lives. Eight years later, Buffalo Creek's 12,000 acre scar was still visible, as it is today, though slowly healing.

Both photos above of the High Meadow burn area were taken in June 2011.
Posted by SLW at 9:27 AM No comments: