Thanksgiving is for the Birds

(Well, except for the turkeys, who are too tasty for their own good.)

We try to take care of our local critters year-round, but we do extra on Thanksgiving and that big holiday in December. We go through untold hundreds of pounds of birdseed every year. Perhaps, if the Lord of the Universe is an ecologist, it will earn us a little karmic appreciation. But that really isn't why we do it.

Lately we've had a couple warm and fluffy rodents around too. We don't usually get squirrels here—not enough pine trees here below the edge of the mountains—but these two Fox Squirrels have taken to chasing around the front yard. Yes, I know they're invasive, and technically I should be shooting them (and eating them), but I can't bring myself to take such noble causes beyond a vegetarian attempt now and then.

So Tuesday at the feed store, when I saw a big bag of peanuts in the shell, it came to mind those would make a good Thanksgiving treat for the little buggers. I even, in my naivete, thought putting them in the suet feeder might require enough manual dexterity (as opposed to mere beak dexterity) to coerce the scrub jays and magpies to leave a few for the squirrels.

Yesterday morning I loaded up the peanuts and put them out a bit after 7:30. The squirrels were running around, and foraging under the main sunflower feeder for fallen seeds, but they didn't get the point. 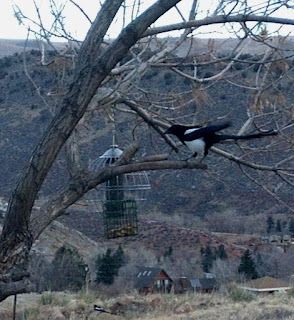 Within minutes, on the other hand, first one scrub jay then another found this new gift. Mind you I also filled the regular suet feeder with suet, and topped off the sunflower seed, but it turned out peanuts were the main attraction and my grand idea of treating the squirrels went bust.

Then the magpies came... 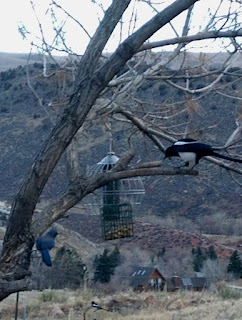 And teamed up with the scrub jays... 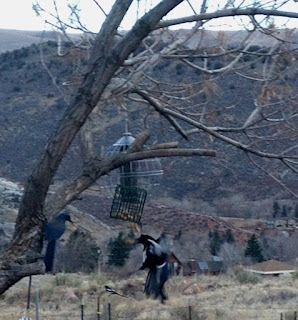 According to the time stamp in my phone, all these photos, documenting the disappearance of just the last third of the peanuts, were taken at 7:43 a.m. 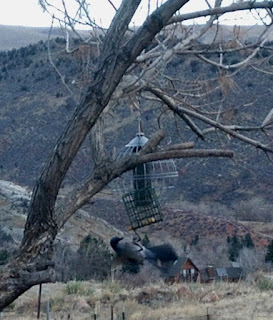 Clearly, a 10-pound bag of peanuts won't last long at this rate! 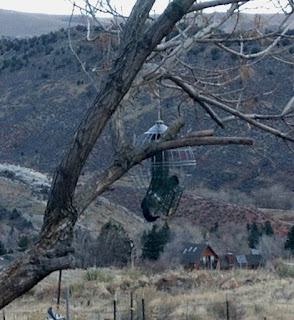 These days we find the sunflower feeder on the ground every single morning. At first we thought it was the wind, knowing a bear would have pulverized it. (The weather's been so nice lately, the bears are staying up way past bedtime! Thanksgiving was a shirt-sleeve affair; we could even have eaten on the patio!)

Accustomed as I am to having scavengers, from skunks and chickens to woodrats and now squirrels, poking around for scattered seeds under the feeder, I was unprepared for the confirmation I saw in the flashlight beam about 5 a.m. yesterday morning. Sure 'nuf, a big fat raccoon was our latest visitor. No wonder the dogs have been so excited on their pre-dawn outings! They may never have seen one; it's been years since one passed through!

Last night we brought the feeder in for safekeeping. No dice; he/she just went for the thistle seed instead. AND, finding no sunflower feeder to empty, ventured onto the porch in search of a few spilled seeds; I spotted him/her again there in the wee hours this morning.

So far, thankfully, the raccoon has shown no inclination to go after the dogs, and I'm on watch now to be more careful when letting them out for early runs.

The little birds were so happy with the refilled feeders that they attracted the attention of a top-level feeder. The Cooper's Hawk made a long glide low across the front yard, in hopes of an easy meal of his own, no doubt.

We also lost one of the chickens over the holiday, so most likely some unknown predator—coyote or fox perhaps—enjoyed Thanksgiving as well!

Me, I'm thankful for all this wildlife, even if it includes the likes of Fox Squirrels, English Sparrows, Starlings, and urban foxes. We are blessed, even by the Rattlesnakes and Skunks.