But we've seen Reynard, the local red fox, too many times lately, so this time I decided to check. 6:54 a.m., full daylight, and he's just outside their gate, about 10 m from the front door; hens are huddled under the big juniper, wary and restless. Naturally, I let the dogs out, and watched as the fox took off to the east and the dogs, logically, dashed north. I'm not sure they ever saw him, but he saw them, so it did the trick.

It's April, after all, and Earth Week, which seems to be a prime time for spotting predators around here. It was April 2001 when we had our first and only eagle attacks; Earth Day 2004 when the coyote attack (only one to date, thankfully) occurred. About 20 chickens died in those episodes. At least the eagle was thoughtful enough to take only one a week.

I realize we have somewhat inadvertently baited local predators by even deciding to keep chickens. On the whole we've been successful—and lucky—these last 16 years, and foxes have not been a problem, even last year, when neighbors kept saying "did you see the fox?" and we kept saying "No!" Lucky, that is, until last Sunday. I was just back from a weekend away, and spotted feathers as I went out to lock up the flock. Too many feathers for this time of year, it's not moulting season and they were too fresh. Sure enough, one short on the beak count! One of the young Araucanas, the ones that like to hop the fence and hang out in the backyard, would no longer be coming home.

Later I found the piles of feathers, drifts in some places, that marked the sites of what must have been a fair struggle. Poor hen.

The dogs are elderly now, 13 and 11, and consider themselves retired. They'd rather spend the day sleeping on the couch than out monitoring for trespassers. In particular, Starbuck (no relation to coffee) has lost much of his hearing and doesn't respond easily. Since their rush to the scene of excitement this a.m. and momentary interest, they are now lobbying strenuously to come back inside.

The fox, who has a good understanding of fences and dogs it seems, circled east and around into the driveway, reluctant to leave and clearly thinking another source of interest might present itself. So I am also on duty, and have to add my eyes and ears to the patrol, checking the east drive regularly in the direction Foxy Reynard went off, with a window open to noise on the west, and with one dog stationed north, the other south. Can their acuity—and mine—be trusted? Will it be enough?

[Technical difficulties prevent photos at the moment; I hope I can put some up later. No fox pix yet anyway...]

Great Blue Herons have been stalking me for about six years now. That is, it was 2006, the same year I started this blog, when I first noticed herons were making a habit of dropping into my consciousness. And a happy habit it is! Friday night, enroute to our regular gathering of bot-brains, I spotted my first heron of the year here in our local creek (fifth of the year overall). Must be time to post those pictures at long last.

Perhaps, to state it better, I was never aware of a special relationship with herons until 2006. That summer I saw herons hither, and I saw them yon. I'd be driving to the grocery store, or some such prosaic activity, and my eye would fall, as if by animal magnetism, on a heron. Silhouetted in flight or motionless in patient pursuit of prey, always a heron. The niece and I launched the trip of a lifetime that summer, and herons were spotted time and again as we drove from Colorado to Connecticut. More herons. After she left mid-adventure, I went on to Maine. One day I was driving through Worcester, Massachusetts, and spotted three herons overhead while I was on the freeway! This is not good for attentive, or even defensive, driving, especially when you end up doing more than 7,000 miles of it!

But I was often driving, and capturing the moment in more than memory was impossible. Once home, I watched for herons regularly on walks by the creek, though, and finally the heron moment and the camera coincided, mid-June 2009.

You walk and you look... until finally you see what you're looking for! Don't you? (maybe you'd better enlarge it, then)

But sometimes your subject doesn't appreciate being seen, and turns his back on you. And stalks, then flies away. 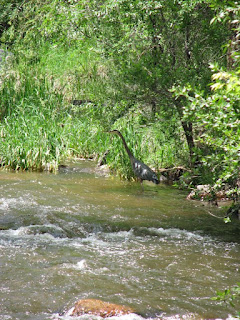 And stands quietly in the shade, a little upstream where he knows you can't see him. Finally you go on with your walk, knowing you can find better pictures on the internet than you could ever take yourself. Good info too! 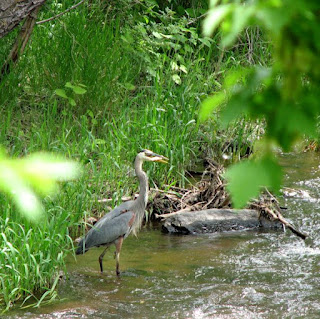 But on the return walk, 13 frames later, you find his patience has been rewarded, and he's more cooperative. So your patience gets rewarded too!


Why post this now, almost three years later? Well, Catwoman sent a timely link to Heron Nest Cam! Perhaps not timely enough, as the last egg was imminent a full week ago. That means it will probably be lonely and boring for the sitter most of the time until about May 1, when the eggs start to hatch! But at the link, you can watch video clips of arrival of the third and fourth eggs, as well as other heron activities.

Maybe not as boring as I thought! Yesterday morning, the nest was attacked by a Great Horned Owl, creating a bit of excitement for the defending sitter, who went into fight mode (something to see in a heron!), revealing that there are now FIVE eggs in the nest instead of the usual four. 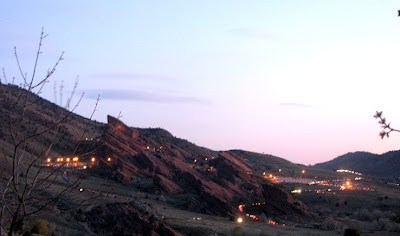 Early this morning, as I watch 12-15,000 people try to shoehorn themselves into an amphitheatre built for less than 10,000, I have to wonder about this special sunrise. Isn't every sunrise a miracle and a marvel worth celebrating?

Last night a luminous golden full Moon rose above the southern end of the Hogback as Mars sat at the Lion's right elbow and Orion prepared to sink into the western horizon. Glory to the Powers that daily offer us the opportunity to be awestruck. Perhaps we see, perhaps more often we do not. But still the sights and sounds and smells—all the sensations—of life on Earth are offered to us.

Spring itself is a recurring miracle; through dry years and wet, still it comes, sometimes with a bang, sometimes quietly sneaking up on our senses—if we are the least bit awake to it. Now and then it occurs to me that pollen allergies are Nature's way of reminding us to pay attention.

The best way, of course, is to get out there and revel in it. But if you need a reminder and can't get outside, the wonders of technology offer alternatives. Good links not to lose must be captured somewhere, and this is a great spot to be able to find them again.

Experience the dramatic unfolding of the history of the planet on this trip through Time. Long periods of apparent emptiness (from our shallow perspective) have become "interesting" only relatively recently, and it's good to be reminded how long the Earth got along without us here to direct things.

We can be reminded of our place in the order of the Universe by getting a sense of our scale in Space as well. Smack in the mid-range of creation, it seems, we are indeed:

Placed on this isthmus of a middle state,
A being darkly wise and rudely great...
—Alexander Pope

It's a wonder, really, that I don't quote Pope here more often. The couplets of An Essay on Man are pretty much burned into my brain. Poets were so durn smart back in 1733.

That's not to say that humans can't create miraculous visions; that brain is pretty amazing too, beyond poetry. Here's a creative genius at work in a whole new medium, provided by Nature. Another link too good to lose, with thanks to the Chemist for sending it.

Lower North Fork Fire -- Over and Out

As of 5 p.m. yesterday, the Jeffco Sheriff's department announced the fire was 100% contained, and ceased updates on their blog.

The snow that was expected Sunday night showed up Monday night and, I rather expect, cheered up residents in the fire zone. We have a dusting, but apparently some schools are closing.

Release of the disturbing 911 calls suggests this story will be with us a long time. 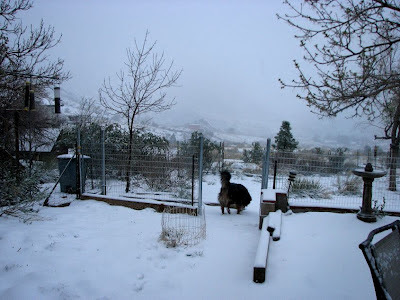 April 3 so far: 30 degrees, downright blizzarding out there. See above.

Not to say we can't use it! Especially welcome after last week!

And every flake... no, pellet that falls takes a handful of spring allergens with it. Or so we hope.

The goldfinches are gradually getting more yellow. Or is it just contrast with today's dull sky?

Labels: spring, weather
Newer Posts Older Posts Home
Subscribe to: Posts (Atom)
Whether we and our politicians know it or not, Nature is a party to all our deals and decisions, and she has more votes, a longer memory, and a sterner sense of justice than we do. —Wendell Berry