Just when it looked like summer might cut the green period short, we welcomed a weekend of wet. It all started with a hailstorm Friday that left my car with a fashionable textured look and stripped twigs from the oaks at the county courthouse. Green streets takes on a whole new meaning. I'd driven north just a few miles to Golden, fortuitously arriving at a traffic light just in time to meet the storm, not one golf ball of which settled on the home turf. Sitting duck, listening to it thunder against the car, no camera. 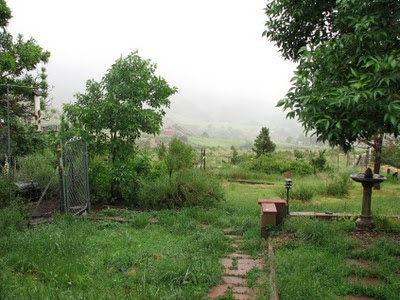 Friday night it arrived, a steady downpour most of the night, threatening floods in various Front Range communities, flushing algae and, I hope, mosquito larvae out of rainbarrels, and setting everything outdoors awash. Yesterday, waves of gentle rain passed through, separated by misty intervals—all very Pacific Northwest. More of same today, as it looks. Tomorrow, or whenever this lifts, is going to be VERY good for weeding! (Honey, looks like the lawn needs mowing again.) 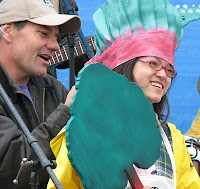 All this rain also makes the rhubarb very happy, if not the celebrants at the 23rd Annual Pine Rhubarb Festival, where I spent most of yesterday. Though the crowd was reduced in size, its spirits were undampened, and the crowning of the Rhubarb Queen ("best ever rhubarb pie") happened right on schedule, as did all ten minutes of the parade. Between the all-you-can-eat pancakes with rhubarb sauce and the highly diverse bake sale that followed the judging, it was a delicious place to be on a rainy day. 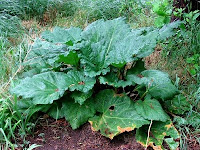 Obligatory botanical note: Rhubarb, Rheum rhabarbarum (formerly R. rhaponticum), is a member of the Polygonaceae, not native to the U.S. but widely grown in the east and midwest and, yes, Colorado. Its stout petioles are edible, but its large leaves contain higher concentrations of oxalic acid and are considered poisonous. When cooked with sugar, the stems are used in "fruit" pies and other pastries, but lately I've had two reports of children in Mexico and other places enjoying the stems raw, difficult as it may be to imagine. (One entry in yesterday's bake-off was a rhubarb salad (not baked), but I didn't get a taste.)

Incidental personal revelation: Rhubarb also had a peripheral role in our courtship, via a Strawberry-Rhubarb Pie, which must have been pretty basic as I don't even remember the recipe. I think it may have been not so much the substance of the pie as the fact that I could even make a pie that captured Darling Husband's attention.

Getting Down... and Busy

Happy Pollination Season! If you notice a sudden jump in the quality of photography in today's post, call it punctuated equilibrium. It's because ALL photos are courtesy of (and copyright to) The Chemist. (Let me know if you want more formal acknowledgement, buddy!) And, of course, his trusty sidekick, a new camera with which he's obviously having way too much fun! You should also know, perhaps, that all this botanizing took place in his own backyard, where he maintains a native garden that offers a seasonal smorgasbord to members of the Apidae. (The botanist left in me wants to say Apiaceae, but that's a whole 'nother subject.)

First up, and earliest in the season (4/15/2010) after a long hungry winter is the Willow (species unspecified). Can't you just hear this honeybee: "Ummm... Yummmm!" 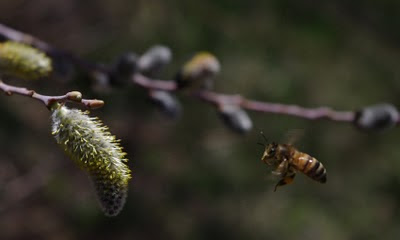 Along about the 24th of May, The Chemist was out in the garden one day, when he realized he was being watched. This diminutive peeping tom declares: "No pollen for me; I'm here for something else altogether." Crab spider in ambush mode on Vicia americana (American vetch). 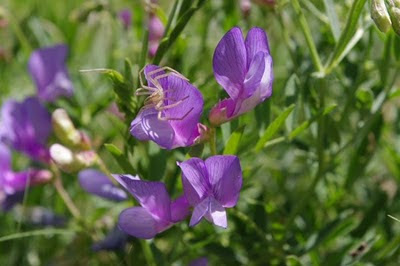 Then came Mertensia lanceolata (chiming bells, 5/31/2010). Still hungry, but a whole different bee (Bombus sp. or at least that group). 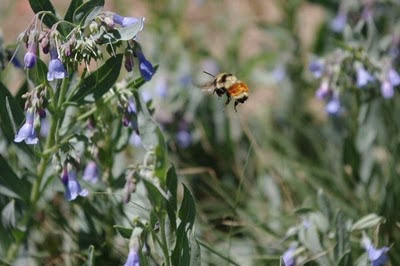 Fast forward to today: yep, they're still at it out there among the flowers! The Chemist reports: "This honeybee put in a great deal of effort trying to squeeze into the tight flowers of Hedysarum boreale [Utah sweetvetch]." Remember, bees, no means no! 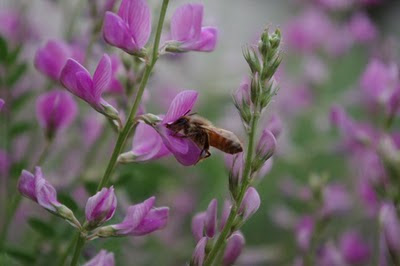 Competition (or something) is heating up though. As he watched, this wasp zoomed in aggressively. The Chemist describes the action: "The wasp/hornet? also was apparently getting nectar but a pair of them seemed more intent on patrolling around the plants (looking for nest provisions?) than foraging for nectar. At one point one of them, apparently intentionally, gave a honey bee a good ramming although the honeybee seemed pretty unperturbed by the collision." 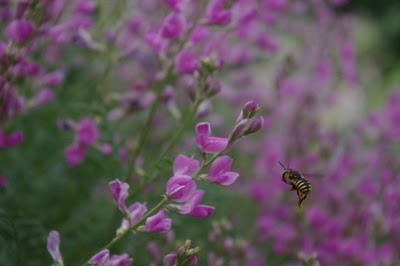 Meanwhile, serenity prevails over at the Orobanche fasciculata (broomrape) [now known by some as Aphyllon fasciculata, but let's not go there*], a parasitic plant nestled quietly amid its host, in this case Artemisia frigida (pasture, silver, or fringed sage). Perhaps these gals were done with the business of agent-assisted courtship, and ready to settle quietly into motherhood-mode.

*I'm old-fashioned, I know, but I still subscribe to the theory that scientific names are supposed to be more permanent and useful than common names. 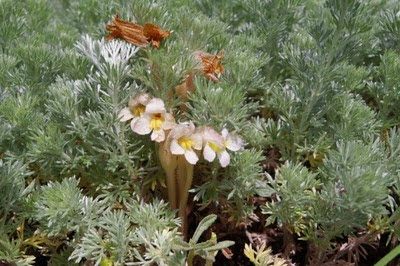 Thanks, Chemist! Bee Lady has been equally busy observing pollinators, so we may have more decent photos to share soon... (The Phylogenist taught me something new about my own camera last week, but trust me you don't want to see my first attempts!)

The calendar tells us Spring "begins" on March 21, the spring equinox, but of course, the world works on its own schedule. Lately, we've all noticed, that schedule seems a little wacky. 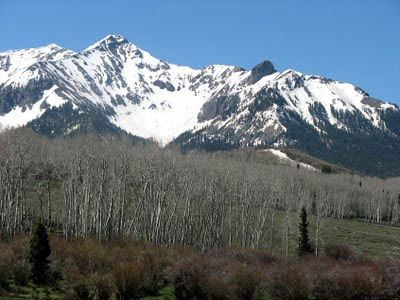 In Colorado, as in much of the West, Spring is relative: it all depends on where you are, especially on how much vertical distance you've managed to put between you and sea level. In the course of the last few weeks, here at the Foothills Fancies homestead, we've jumped from winter into late spring in a hurry. Most of the early spring wildflowers are gone, and, judging from what's blooming, we're well on the way to summer. Sigh. 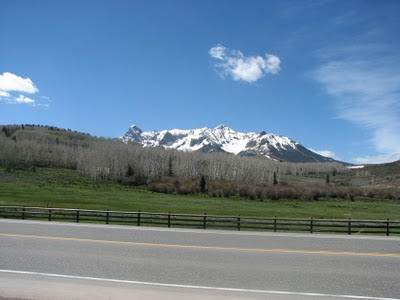 So when I went West to Talented Sister's on May 22nd, I got to visit an earlier version of Spring, places where the ground is just emerging from snow cover. She lives in the midst of Aspen and Gambel Oak woodlands on a high mesa in southwestern Colorado, very different from here. The up-and-down of the trip also gave me an opportunity to sample the varieties of season available now.

All this is too much prelude to an actual topic. Quaking Aspen (Populus tremuloides) and Gambel's Oak (Quercus gambelii) are both species that "reproduce" mostly vegetatively, forming huge clones of interconnected stems that look like individual trees. So how can you tell where one individual leaves off and another one starts? Because different clones respond differently to seasonal cues, Spring is often a great clue. It's a time of year when you can catch aspen, especially, displaying their individuality. (The oak wasn't displaying anything just yet.) How many, then, do you see in the photo below? 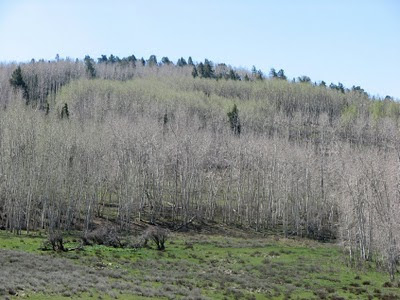 These photos were all taken in two quick stops along Hwy 62 as it crosses the Dallas Divide between Ridgway and Placerville. I'm thinking we're seeing at least three, maybe even five, individual aspen among the many trees present above. That is, of course, a wild guess totally unsupported by DNA evidence. Me, I was just there for the scenery.*

* Much of the scenery is, by the way, brought to us by Ralph Lauren, whose ranch, the Double RL, occupies 16,000 acres (that's 25 sq miles, people) and a good deal of linear footage along this route. It's nice when vast wealth benefits the rest of us. Thanks, Ralph! If you pass this way, you'll recognize Ralph's property by the tasteful 4-rail fence on the south side of the highway (see photo 2).

Such aspen clones are in the running for a world record, if not still holding. The Watcher, saving me a lot of time and trouble, tells us all about cloning and Pando, a giant aspen in Utah that's thought, so far, to be the world's largest organism, in his several posts on the topic. Wikipedia agrees, and so does Wayne's Word, though that site offers a few other contenders in the "most massive" category.

I especially appreciated these Sunday morning views in contrast to the previous evening, when I drove from Montrose to Sister's in a haze of yellowish gray smoke from the Beaver Fire near Norwood, caused by powerlines downed by the phenomenal winds that plagued my 580-mile trip that weekend. Another 3200 acres reclaimed for aspen, perhaps. 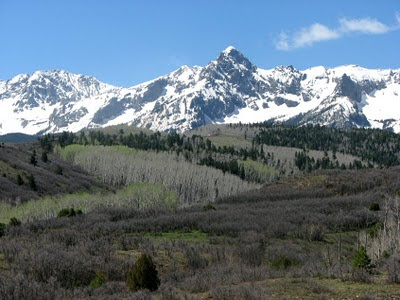 Fire is closely associated with aspen, whose cloning habit enables it to be resilient in the face of loss of its aboveground parts. Oak, too, abides below through fires. Scenes like this, with the light spring green and pale grey of aspen set off by darker grey of oak and conifers, depend on fire for the aesthetic pattern we find so appealing. 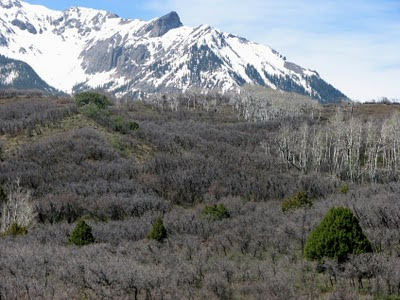 Of course, getting to see the San Juan Mountains in the background doesn't hurt either! Enjoy the view... 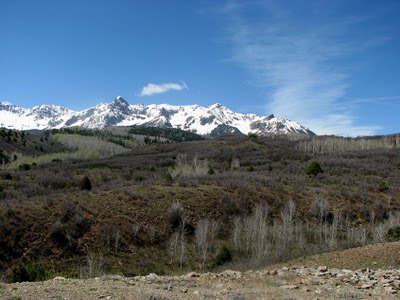 Labels: plants, spring
Newer Posts Older Posts Home
Subscribe to: Posts (Atom)
Whether we and our politicians know it or not, Nature is a party to all our deals and decisions, and she has more votes, a longer memory, and a sterner sense of justice than we do. —Wendell Berry