There will be Stories!

Catwoman and five of her charges arrived Monday night at 11:30 pm, refugees from the Lower North Fork Fire. We've had quite a week, keeping tabs on the TV news more than usual, watching the weather, and monitoring the Jeffco sheriff's blog for updates. Although her home is just on the edge of the evacuation zone, it's in a tight spot with only one way out, so leaving was the prudent option.

Not to mention that it takes time to catch all those cats, especially after catching the first one makes the others wary and downright panicky.

"There will be stories," she said as we talked over glasses of wine until Monday turned into Tuesday, and she had already shared a few from her harrowing evening. What do you take if you have limited time and only one car? What should you add if your friend kindly comes to help, giving you the chance for a second load? How long can you afford to spend packing? Sobering thoughts! 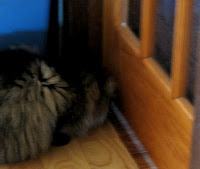 We've been surprised that having so many cats in the house—strangers!— has gone as smoothly as it has. The guests stay quietly in the guest room, and resident felines have barely noticed their presence. They know something's up, but on the whole, it's going great, and we're enjoying spending time with Catwoman.

About Wednesday, Catwoman came up with an addition to our list of seasonal harbingers. "When you hear slurry bombers overhead, it's a sure sign of spring!" In fact, it was this same time last year when we posted about the Indian Gulch fire near Golden.

At first it seemed everyone was surprised by the erratic nature of this fire. Reports went from 200 acres to 3,000 overnight, then jumped to 4,500. By Thursday, the official story had grown somewhat clearer, as we struggled to balance that version against disquieting word-of-mouth reports that were becoming more numerous and more compelling. Even the sad report of fatalities may be a two-sided story. It will be a while before it's all sorted out, no doubt, and, as one evacuated resident said on the news, it's important to be reasonable, and not rush to judgment before the facts are in. Despite hotspots of anger, we've been surprised how many people do seem to be taking a more measured or philosophical attitude. Even some of the 27 families who have lost their homes. Yes, there are things that perhaps should be done, or can be done in the future, but people also seem to realize that "it's the cost of living in a pretty place," as one noted.

Yesterday morning the responders finally announced 45% containment—great progress! That was upgraded to 70% last night, and 90% this morning. (See latest map.) They're keeping 500 homes on alert today though, because of high winds expected, so it seems the cats, at least, will be here a while yet.

——
The Husband pointed out the plume of smoke visible from the house about 5 p.m. Monday. It hadn't been there when I got home at 3:30, and of course, I never did think of the camera. I have no presence of mind.

Others do: Heart-rending video is available at YouTube: for a good look at the plume; more at time lapse, and Escaping the Fire, raw form, and edited with commentary and interviews.

Can this really be Spring? Already?

Baby black widows and wildfires aren't the only signs of Spring around here. It's a'poppin', and that in itself is reason for concern.

March turned out to be drier than ever before, after that near-record-wet February. Usually our snowiest month, March yielded nary a flake, although it took most of the month for February's piles to melt. But with dry air and some wonderful winds, no wonder fire season is gearing up fast...

But Spring will not be dissuaded easily when temps run in the 70s. (10s C)

Where are those Phenology folks when you need 'em?

According to Bloom Watch, average peak for cherry blossoms is April 4. This year, peak was March 20, and blooming period was only 9 days, compared to 2008's 17 and a 5-year average of 12.5 days.

Yes, it's glorious, but cheer up! Snow and rain are in the forecast, starting late tomorrow. We can only hope...

This is like a guest post, only I couldn't talk anyone into writing it, so had to paste in tidbits from their emails to give you an idea what's going on here lately. Here's an up-to-the-minute report from the team of observers and correspondents out there, just like on the news. P.s.: there are flowers too, but not in this post!

I've been waiting for this sign for several weeks...the first baby black widow spider just made an unsuccessful crossing of my desk. I always get a hatch in my office about now. Generally I leave them alone and I think probably only one or so survives their cannabalism. They tend to occupy the same corners forever...hopefully (same, that is, not forever would be OK.) Cheers?

[Catwoman and I were crushed that he crushed the innocent little darling, but it seems clear that it would have lived, had it not been so indiscreet as to cross his desk.]

From Bee Lady and Flame, who recently returned from the South and west:

We had a great time in AZ, saw yellow eyed juncos, vermilion flycatchers, costa's hummingbirds, and lots of [California] poppies!

From Catwoman, who kicked these reports off back on March 21, 2012:

It's officially Spring, and so many animals are coming out of the woodwork here that I wanted to share some of the excitement!

Two pygmy owls began calling last week. I found a soft spot next to the driveway not far from the house to sit and listen for them. They call around dusk, and I had waited for a half-hour or so when I heard footsteps coming towards me that sounded like a person. It took four footfalls for me to turn my head and see the mountain lion that was only 20 feet away!! I said "oh s**t" in my head and jumped up and yelled something. The startled cat wheeled around and left lickety split. She didn't know I was there either...glad it was muddy so I could hear her coming. 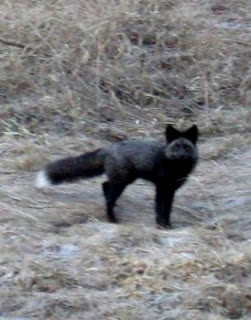 This morning started with one pygmy tooting just before dawn. Ten minutes later, a half red-half black fox sat pretty in the front yard. On the way out, there was an all-black one hunting by the gate. And just after I got home, seven turkeys filed past the window!!

[Catwoman clearly has more aplomb afield than I would in such a situation. And her hearing is better! The fox story is another that should be told, but neither Catwoman nor I has the stomach for it.] 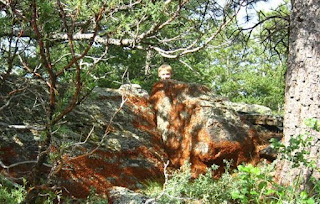 Catwoman also had an entire day of fame recently, when she won mention in the local Audubon photo contest but, sadly, finished out of the money. She was featured on March 8th for a photo related to this one, but you can check the other 249 featured winners at Share the View. Today's photo is particularly "striking." I hope you can figure this one out—really must get [her] around to blogging it sometime. Guesses, anyone? A great nature moment to share with kids.

If you get the impression I've been spending more time with Catwoman lately, you'd be right. That will have to be another story...

The Ides of March

Cloud cover and dawn conspire to create a somewhat eerie feel to the air this morning, a sense of foreboding. In the East, the Sun is reaching mid-hogback, a sure sign of the approaching equinox. Somewhere in this direction, a lone bird chirps greeting. The Sun will rise about dead center of this view in another 15 minutes. 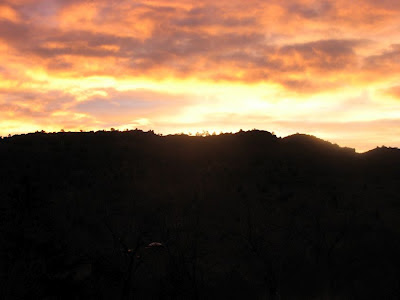 To the North, the usual scene is washed with pink and blue, and I think I hear geese overhead, but can't get visual confirmation. 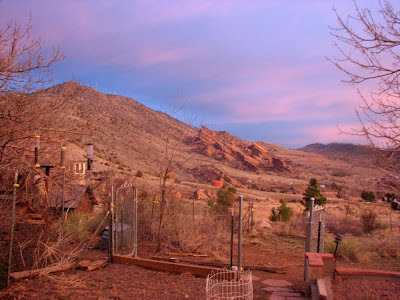 Weather-wise, March has been quiet, having delegated its snowstorms to February. This week spring-like temperatures have eliminated February's white piles, urging bulbs and buds to sprout and people to shed the layers of winter. "Ides," however, is only half-way through; there's still time.

Evenings lately have brought the marvelous spectacle of the dance between bright Jupiter and brilliant Venus in the western sky. For a while, the Moon shared the view.

Turn 180, and the most russet Mars I've ever seen hovers over the hogback in the east, as if lit by internal rather than external fires. Still in Leo, as we see later in the evening as the sky darkens.

They say this year's spring equinox is early, at least for us! It falls on the 19th instead of the 20-21st. I wonder if the extra day of February accounts for some of that?

Labels: moon and stars, weather
Newer Posts Older Posts Home
Subscribe to: Posts (Atom)
Whether we and our politicians know it or not, Nature is a party to all our deals and decisions, and she has more votes, a longer memory, and a sterner sense of justice than we do. —Wendell Berry