For weeks now, I've been wanting to drive up to the lower mountains (or upper foothills) and get a snowbound photo to go with February's post on my special gulch. 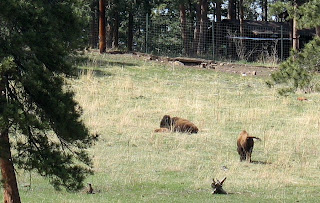 We finally did the tour on Mother's Day, with MiL along for a delightful ride, but the snow that afternoon was old and tired looking. We did see the first few bison calves of the season at Genesee Park, small light brown lumps near large darker brown humps of mom. Happy Mother's Day, girls; and Happy Birthday, bisonlings. Click for full-screen to find two of each, moms and newbies. (Yes, that's a house in the background.) 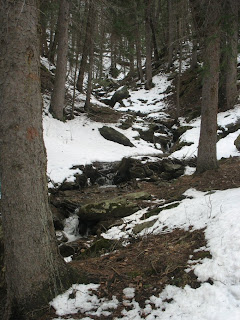 We had a cool wet week, so I returned on Friday (mind, we're talking May 16th now) in search of fresher, cleaner snow. I guess the surprise was that there wasn't more of it—but the snow provided the winter view I'd neglected to acquire back in Jan-Feb when driving there would have been more challenging. Along with it came an ice-cold, crystal-clear omen of mosses, ferns, and wildflowers to come.

While I was revisiting winter, the Husband was driving to Moab, UT, for a weekend of biking in the high desert. He called with talk of Desert Trumpets and the news that he'd purchased a wildflower guide. Shows to go: after 28 years of marriage, your spouse can still surprise you! All weekend the talk, when he called, was of the fragrance of Cliffrose along the road, or the ephemeral flowers of Evening-Primrose, or even the scorched earth efforts to eradicate Tamarisk along the Colorado River. 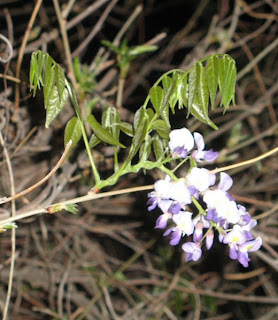 Then yesterday, the Handy Helper and I were working on house stuff (he painting, me organizing, sort of) when I called him outside to see a Golden Eagle soaring overhead. The importance of looking up. An hour later, the Husband got home from his trip and called my attention to the First Wisteria Blossom in the exact opposite direction, which I'd completely missed! Go figure.

As you might imagine, Wisteria does not grow in Colorado. I did not know that 25 years ago when, in all innocence, I mail-ordered this one and planted it on the east side of our new home in the foothills. It grew rampantly; in fact, it's taken over two trellises and tries to choke itself annually. Two years ago, it decided to bloom, and was covered with flower buds in promising drooping inflorescences, one of which opened. I began to plan elegant tea parties under the arbor. Really! (I know, another surprise.) Then came June, a very dry June, and no more blooms were seen. Until yesterday.

I had a fabulous weekend myself, though not exactly FF-bloggable material. It was one of those rare occasions when Life was more fun than Blogging. Imagine!
Posted by SLW at 7:19 AM 3 comments:

Click to enlarge and see NCCCers all over the park. 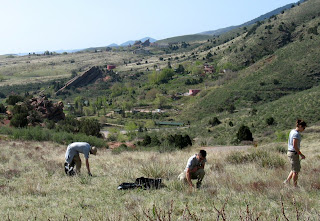 We kicked off Americorps Week yesterday by pulling weeds (under warm sunny skies) in Red Rocks Park with about 300 Americorps NCCC volunteers. Check it out! 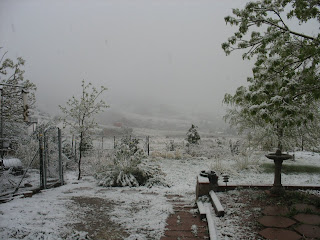 About this morning, the best that can be said (besides the traditional "we need the moisture," always true) is that it's a good thing it wasn't like this yesterday!

They just keep showing up! Yesterday I glanced out just after 3 p.m. and was startled to see another surprise on the doorstep. This one the bird books don't even show as belonging in Colorado. Hmmm. 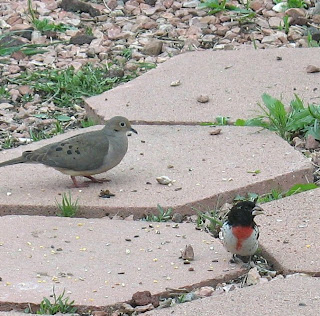 An easy ID this time, no question. This bright male posed for more than a minute, then flew into the treetop, and soon disappeared. (For once, the camera was handy.) The dove looks as surprised as I was. Of course, I immediately made sure to restock the feeders with sunflower seed. Hope he returns soon.

The Rose-breasted Grosbeak is said to be common to eastern deciduous forests and orchards, and allegedly hybridizes with our Black-headed Grosbeaks (one male watched from the feeder while this guy visited). My older bird book* calls this bird a "rare straggler" who "has a propensity to wander far from its eastern range." One was collected in 1938 south of Denver, and they have been recorded breeding at Longmont, further north.

I'll update this post after checking with a local bird authority for more information, but I get the idea that sightings are more common here than in the past. Perhaps there's hope of seeing him again.

Welcome, stay as long as you like! But honey, you're not in Kansas anymore!

——
* Niedrach, Robert J. and Robert B. Rockwell. 1939. The Birds of Denver and the Mountain Parks. The Colorado Museum of Natural History, Popular Series No. 5.

Half asleep, about 5 a.m., listening to a rumble. Cats growling at each other, perhaps? No, more subtle... Lights flashing vaguely through closed eyelids. Seems familiar. Oh, right... ummm, thunder, that's it! Been a long long time. 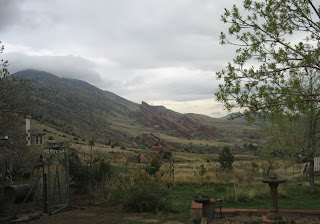 So yes, we have prospects of rain today. A few drops have already fallen and a small dampness prevails. Smell of spring. I revel in these days, when we see the green really starting to spread on the nearby hills. Days like this, a friend says, "temporarily assuage our resistance to living in a semi-arid climate." Spring is late and will, no doubt, be too short. Today the lilacs are barely budding, tomorrow it could be 80 again, as it was on Monday.

By the way, to update previous pessimism, the ash leaves survived that last snow storm, but the asparagus took a hit from the chickens. Apple tree is in bloom.

This gloom, therefore, bodes well, brings prospects of life flourishing and flowering. Keep your fingers crossed.
Posted by SLW at 7:10 AM No comments:

Yes, it's that time of year again, when we're watching for the first of the spring migrants to return. But beyond that, a few place-firsts have happened along too. Here's an update.

Most startling, perhaps, among the wild happenings lately was the Wild Turkey that showed up on Earth Day, April 22. Our first sighting here in more than two decades...

Then, on Sunday (May 4), we saw our first-ever Red Breasted Nuthatch here at the homestead. (And my 2nd ever in Colorado...)

Yesterday, I spotted the first Bullock's Oriole, a male, dipping from the hummingbird feeder of course. 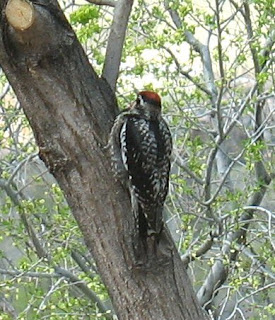 And today (with, finally, a picture): the Red-Naped Sapsucker (or so I conclude from examination of the bird books). His red appears to be more on the throat and crown than the nape, to my view. He's also a first-ever here, and for me.

Also today, the first Black-headed Grosbeak of our local flock appeared. A bright male, like the one at my 2006 Mother's Day post. Have not spotted the females yet, but these are among our favorite local nesters. I've lost track of how many generations we've raised here...

So, welcome to all of you birdies. The red and orange season has clearly arrived, and the Juncos seem to have moved on. We still have a few White-crowned Sparrows around though.
Posted by SLW at 5:49 PM 1 comment:

Another Taste of Spring

Addendum: In my search for posts for Berry-Go-Round in recent weeks, I missed a wonderful opportunity to introduce you to Cate at Beyond the Fields We Know. She was buried in snow the last time I stopped in, so I hadn't expected her to have flowers already. For a glorious look at eastern woodland wildflowers, some of my childhood favorites, please drop by. Her May Day (Beltane) tribute is just up, but do scroll down through a marvelous sequence of Trout Lily, Bloodroot, Trillium and more! 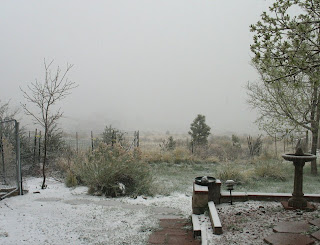 Meanwhile, here at "the Shire" (as The Husband would say), we are having a lovely Beltane Day as well. Much needed moisture, but perhaps not preferred in quite this form. I must go cover the asparagus, just emerging. Wonder if the ash leaves will make it through this time.
Posted by SLW at 8:43 AM 2 comments:

Labels: links, spring, weather
Newer Posts Older Posts Home
Subscribe to: Posts (Atom)
Whether we and our politicians know it or not, Nature is a party to all our deals and decisions, and she has more votes, a longer memory, and a sterner sense of justice than we do. —Wendell Berry