Lioness and Guardian stopped by the other day to pick up a large night-blooming Cereus in need of a good home. Somehow the conversation turned to Hackberry; I forget just how that happened. They had asked me to ID a couple of dry winter twigs they found (Brickellia californica and Eriogonum effusum, don,t ask me how I knew--Gestalt taxonomy?). And I needed to write a plant post for BGR, so... 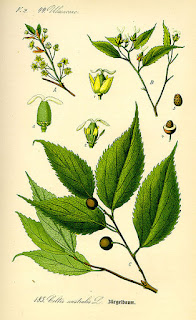 What is mysterious about Hackberry? Lots of things, it turns out. I knew it as a native shade tree, but the story is complex, as so many are once you delve into them a bit. The genus Celtis is a tangled web whose strands cross the planet. Wikipedia isn't sure how many species there are, 60 to 70 perhaps, but one or more of them is found in almost every continent and archipelago. Who knew?

Hackberry once belonged to the Ulmaceae, and in its "shade tree" form makes a good substitute for American Elm. Now, however, I hear it's been placed with the Cannabaceae, with whose famous members it probably shouldn't be confused. It is a tall tree, graceful and elegant. Sometimes. And much in need of taxonomic examination.


Here's what one set of data suggests for its U.S. occurrence: 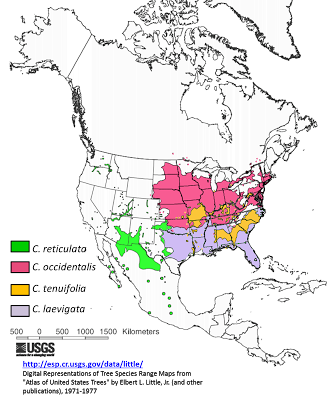 We have, perhaps, two species in Colorado. Once I would have readily said these are Celtis occidentalis L. and Celtis reticulata Torr., but the experts don't agree even on that simple point. They unite on the species C. occidentalis, the Eastern or Common Hackberry, named "western" by Linnaeus apparently as distinct from C. orientalis, an Asian species but disagree on whether it's here. They also waffle on C. reticulata, formerly C. douglasii, which some place as a subspecies of Celtis laevigata, a species confined by others to the southeastern U.S.

The Chemist is certain. He believes C. reticulata is a gnarly small native tree, and C. occidentalis is the tall, nonnative shade tree one. The latter is far more likely to be spotted, often along drainages. They are so different, he says, that they must be two distinct species; I'm inclined to agree. Take a look at the Colorado distribution (adapted from the Plants database; green being reticulata, pink C occi, and blue for both):

(Contrariwise, NatureServe says C occi is in 40 states--but not Colorado.)

"My" hackberry, the solitary one in our yard, is an indeterminate case. I'm leaning toward C occi. The house was 12 years old when we moved in, and this tree presumably no older. Now, thirty years later, it's a bit taller but not much changed. It still looks young, without witches brooms, and without a trace of gnarliness. Was it planted from nursery stock, by former occupants? Or did it germinate from seed brought in by birds? I can only guess. It doesn't grow (much), probably because it's surviving solely on natural precipitation, but it doesn't die either. A testament to the drought hardiness and resilience of this plant.

Guardian's question was about "those things" that grow on Hackberry. "Galls" I said before I got my brain in gear, and it's true that Hackberry is beset by gall-forming insects, from bud and petiole galls to the distinct nipple gall often seen on the leaves. 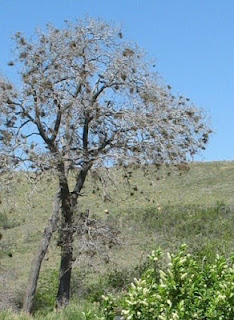 "Witches brooms" is the correct answer, at least this time of year. What causes these odd growths that become the easiest and most reliable way to recognize Hackberry in winter? Turns out, scientists aren't exactly sure. Two candidates—an eriophyid mite and a fungus—vie for the honor, but the result is a characteristic of the plant that is practically diagnostic! They disfigure its winter aspect, but are barely visible in summer after the trees leaf out.

In our part of Colorado, Hackberry is historical legend. Place names abound, as you'd expect; this ubiquitous genus lends its name to towns (in AZ, LA, and TX), street names, and Hills (in Las Vegas, NV, as well as TX, CT, and IN). Our Hackberry Hill is in Arvada, at about 76th and Wadsworth, has its own Wikipedia page, and is made even more famous by the nationally known elementary school (see Southern Poverty Law Center for a nice story; good for them!). But it no longer has a famous Hackberry tree.

The tree that gave its name to Hackberry Hill was, most likely, a common Hackberry, C occi, singled out for its exotic occurrence on this high spot. 'Tis said that natives and pioneers used the tree as a distant landmark, and it is believed to have sprouted from the medicine pouch of an Indian chief killed in battle and buried at this spot long ago. It was huge! But it was in the way of progress, and therefore had to be cut down. Locals rebelled, and the giant tree was to be transplanted. A trench was dug around it in preparation, but vandals intervened one night in 1937 and settled the contentious issue before the tree was salvaged.

If a plant post comes, can February's Berry-Go-Round be far behind? Look for it later today! 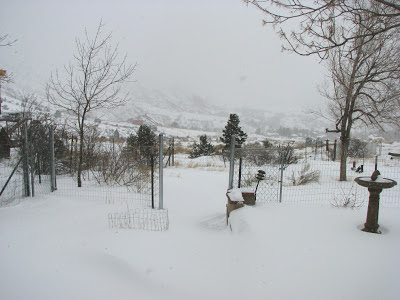 A co-worker and I were debating this year's coming drought the other day, especially relative to its effects on grass and therefore large domestic herbivores in Colorado. This came in the wake of dire forecasts in local media and across the West. With little forage, livestock feeding started early last fall, hay prices doubled, and groceries will too, after a lag.

Thus the snow that fell energetically all day Sunday, delivering 8 to 12 inches (20-30 cm) across the Front Range, was greeted with universal enthusiasm. Guess what it's doing out there today? After a wimpy start, today's storm (above) is now gaining its own momentum. Six or eight more of these, and we should be in good shape!

My colleague is right that drought bodes ill in many ways, from another bad wildfire season to water rationing in municipalities, but the native grasses of the Great Plains of Colorado have seen such episodes many times before. Give them a little encouragement—and this storm certainly will—and they'll be back! That, however, is a topic for another day.

Changing the subject somewhat, I'm happy to report that we have a great selection of submissions for this month's Berry-Go-Round. Thanks to all of you diligent plant bloggers, we'll have some good reading for you here later this week!

Good morning, all. Today is the deadline for submissions to this month's Berry-Go-Round, our carnival for plant bloggers everywhere! If you haven't heard of it, check the link for past issues and instructions on submitting. Or tweet us a link to your post using hashtag #berrygoround. There's even a handy submission form!

Generations of BGR hosts have given me leeway on those submittal deadlines, so I will tell you that, as a practical matter, the true deadline is more like 6 a.m. Mountain Standard Time (US) tomorrow, February 26th. Need more time? Talk to me and we'll work something out. I aim to have this month's edition posted by the end of the week-- and already have almost a dozen entries!

Maybe extending a tad will give me time for a post of my own! But the 8 to 12 inches (20-30 cm) of white stuff that arrived yesterday means I can't even see plants out there (except trees, of course)... but I know that somewhere in the world there is green, and even flowers!

Can't wait? Enjoy this video of potato late blight set to music, just tweeted by Luigi! Beautiful, but sad too... Thanks, Luigi!

That's right! This month's Berry-Go-Round will be hosted here at Foothills Fancies, which itself is experiencing a bit of release from dormancy. (Posts have been scarce here due to a long intense project that is, finally, nearing completion.)

If you can't wait, or are in need of inspiration, check out: Please bring on your plant-related posts by February 25th for our round-up, appearing here at the end of this short month. I look forward to seeing tons of posts by BGR regulars as well as new plant bloggers!

Need help submitting? It's all right here. BGR overlord Susannah has also made it even easier: all it takes to get our attention is use of our new Twitter hashtag! #berrygoround.