This little photo essay is the result of trips to Summit Lake, at the base of Mt. Evans, on September 9th and 18th, 2009. Fall was well underway, and no less spectacular than the aspens at lower elevations. It is now winter there at 12,800 ft (3,900 m). The Mt. Evans road is closed for the season, and you can no longer drive even as far as Summit Lake. 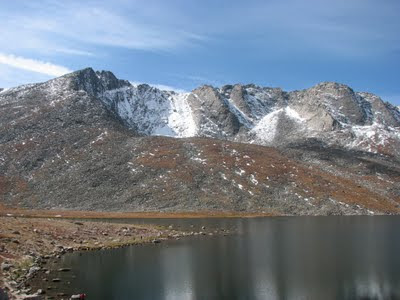 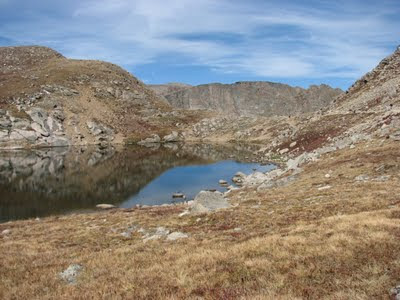 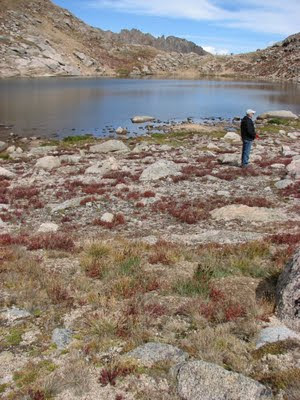 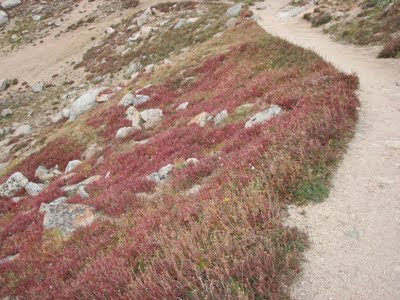 Above is the main trail from the parking lot to the Chicago Lakes Overlook. Next summer it will be replaced by a new trail on a better alignment, thanks to a grant from the State Trails program. The deep red color is provided by the leaves of Alpine Avens, Acomastylis (formerly Geum) rossii, a common tundra wildflower in the Rose Family. 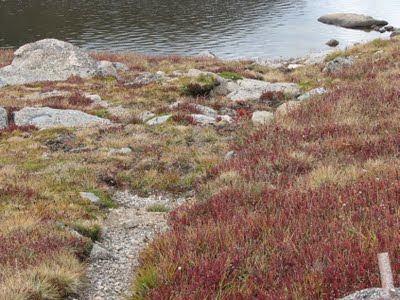 This old social trail was revegetated just last summer, at least up to the point where bare gravel is showing. Somewhat to my surprise, placing chunks of tundra turf in the old trail bed has been very successful in obliterating this old scar.

Arizona introduced me to vultures when I was about 22 years old. In those days, Turkey Vultures (Cathartes aura) hadn't yet penetrated the habitats of upstate New York where I grew up, so I had to come west to make their acquaintance. Because they were new to me (as were many other living things in Arizona), they were automatically fascinating. 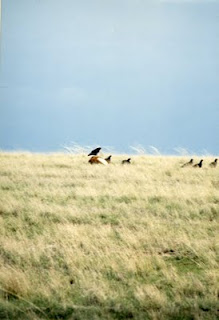 Parts of the desert landscape, too many parts I'm sure, were home to cows, and often some of those cows were recently deceased. Not until I reached the desert grasslands of southern Arizona, though, did I see vultures in numbers. I captured this photo back then, probably somewhere between Elgin and Fort Huachuca.

Unlike other raptors, Turkey Vultures are happy with a cold buffet, one that Nature quite regularly lays for them. Everything dies, and everything must be recycled, sooner or later, one way or another. With vultures, it's sooner. They may not always come first to the feast, but once they arrive, other feathered scavengers must move on, or be adept at dodging in for leftovers.

Unlike most birds, Turkey Vultures have a keen sense of smell as well as eyesight, quickly finding new sources of food. Their range expansion northward in recent decades has been attributed to climate changes, increases in open habitat relative to forests, protection from hunting, and, my personal favorite, opportunism as a result of our expanded highway system. More and better roads--> faster speeds--> more roadkill--> vulture habitat improvement! An ironic and unintended benefit from our continued environmental deterioration.

There's a nice article on range expansion here, as vultures return to Vermont. Turkey Vulture populations are apparently strong, unlike other vultures in other parts of the world. Thanks to the folks at IVAD, who are working to create awareness of conservation needs of these fascinating birds, without whose help we'd be hip-deep in rotting carcasses!

Check out more about vultures over at IVAD headquarters. See, especially, Tai Haku's contribution, which is loaded with excellent photos and a timely reminder of appropriate human funeral customs.

Labels: birds, carnivals
Newer Posts Older Posts Home
Subscribe to: Posts (Atom)
Whether we and our politicians know it or not, Nature is a party to all our deals and decisions, and she has more votes, a longer memory, and a sterner sense of justice than we do. —Wendell Berry