We have a state cactus!

Thanks to the young women of Girl Scout Troop 2518 of Douglas County, and nudged forward by Rep. Carole Murray's rap performance, we have a new state cactus. On March 7th, unbeknownst to my small circle of plant enthusiasts (who may not be diligent in watching legislative activities, it must be confessed), the Denver Post announced the event, which became official in ceremonies with Gov. Hickenlooper at the Capitol.

We may have missed it because we were en route to Tucson for a meet-up of the First Friday Botanists, but that's another story.

Anyway, lest the suspense grow too unbearable, let me introduce the Scarlet Claret Cup, Echinocereus triglochidiatus, as this week's [year's?] Plant of the Week! 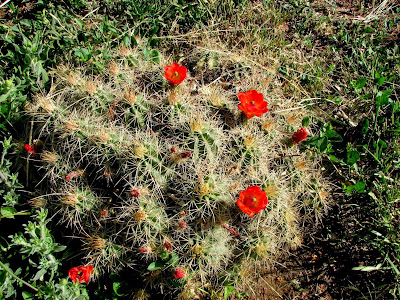 My rather inadequate portrait is of a "captive" specimen at Red Rocks Park, a remnant of a cactus garden that once thrived there, back in the 1960s to 1980s. It was in the way of new landscaping that's about to be installed in front of the Trading Post, so (as of yesterday), the two surviving specimens and their historic sign are residing in custody awaiting transfer to a new site in our Red Rocks Native Garden.

Better photos are available from the Southwest Colorado Wildflowers site, an excellent resource.

The one puzzle was why "Kingcup" in all the publicity? It's not a name I'd heard applied, and for a moment I feared SW Colorado Wildflowers, with their photos of a "King" and "Queen" and "Supreme Master" of the species, had led the poor Girl Scouts astray. Further checking revealed that there is, indeed, a related species called Mojave kingcup cactus, and in fact the USDA Plants database uses "kingcup" for the species we have long known as "claret cup." Perhaps wisely, Plantlist.org refuses to give a common name and prefers to consider the subspecies as mere synonyms. 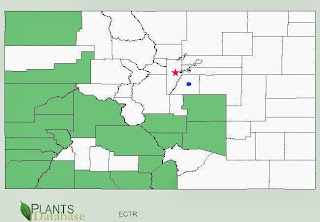 You have only to try to say Echinocereus triglochidiatus three times fast to know why we might prefer a good common name. In any case, perhaps we may be forgiven for not knowing it as "kingcup," as it's clear from the distribution map that this cactus is not strictly "native" to Jefferson Co. (red star) and our local occurrence may be considered an outlier. For that matter, it doesn't naturally occur in Castle Rock, where the Girl Scout Troop is, either! (blue dot) 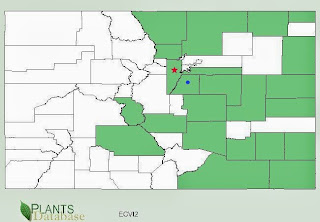 I'm going to be old-fashioned and stick with "claret cup" for the foreseeable future. This is another of the cacti known as hedgehog cactus, and this makes a good common name for the entire genus. Our other local hedgehog is Echinocereus viridiflorus, which translates to the green-flowered hedgehog. It occurs in most of eastern Colorado and New Mexico, with just a bit in Wyoming and the westernmost tier of plains states for good measure. But, alas, those inconspicuous greenish-yellow flowers just don't attract much publicity! Did the good Girl Scouts opt for the pretty tepals, or did they just prefer western Colorado over eastern?

We found three beautiful inches of snow on the yard and cars and everything else this morning. Lots of moisture in it too--I thought, mistakenly, I could just sweep it off, but it was far too heavy. Good for those lovely green daffodil tips that are just poking out of the soil.

But soon I will have something completely new to post about!* Tomorrow bright and early, friends and I head south and west. We're off to Tucson, AZ, for some birding and botanizing with Book Lady and more of the First Friday crew. The Chemist, the Lioness, and I are (gulp) driving down together, and expect to share many nature adventures along the way.

I'm hoping that this will help jog the blogging genes loose and we'll get lots of new photos and material to share online. Book Lady has been dazzling us for weeks with temptations like bobcats, hummingbirds, Gambel's quail, and (so I hear) even roadrunners. Foothills Fancies will hang out in some different foothills, maybe even old stomping grounds in southern Arizona, and (we can only hope) come back newly inspired to write about the home turf.


* Let me assure you there's been no dearth of things to post about around here for the past few months. Have just been off pursuing other challenges...