Carnivals in the blog world are, in my book, a much more pleasant experience than those crowded, noisy events we have in the "real" world. (Oh wait, maybe I'm thinking of circuses.)

In any case, we have two new blog carnivals to anticipate with the New Year. First is House of Herps, devoted to our favorite scaly and slimy beings, the reptiles and amphibians. The first edition will be out in... oh! This very week—on or before Friday. Good cold-blooded reading for the weekend. Why a herp carnival? Noting the lack, the founders say:

So we decided to change that. Amber of Birder’s Lounge and I (Jason of xenogere) have conspired together to kick off a celebration of all things herpetological.

The invention of House of Herps was aided and abetted by Ted of Beetles in the Bush. Now that someone's taken up the herp challenge, Ted's inspired to do the same for his favorite insects, the beetles, at An Inordinate Fondness. That carnival will launch in February.

Please note: Nature bloggers are welcome at these carnivals; they're not just for specialists!

Here at home, I haven't been entirely neglecting my nature observations. Inspired by the Geminids, I've been doing a bit of stargazing and learning a few new constellations. In the works are some Awesome Watcher-style Graphics, so we'll see. Nor have I forgotten the spider post I'm supposed to be working on. Hmmm...

I did manage to submit a post from last summer for House of Herps, and there may be hope of a new plant post before the next Berry-Go-Round rolls around. And, of course, now I'm going to have to start learning beetles! Well, come summer, that is. 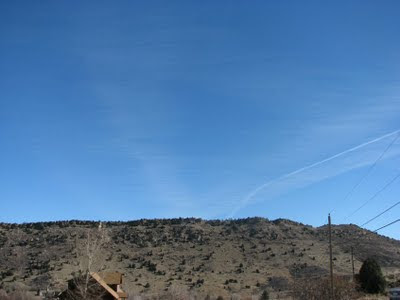 Last week, before the onslaught of dense clouds and cold weather we've been having, I kept trying to capture a Colorado "true blue" sky. My timing was never right, as the best ones occur in morning hours, off to the northwest, while south and east tend to be more washed out.

Then this unusual formation caught my eye—several broad streaks radiating from an area to the east, behind the hogback, like faint streams of sediment in an otherwise clear stream. The only explanation I can offer is contrails, spread laterally by winds aloft, or what, according to Wikipedia, would be called decaying contrails. This is suggested by comparison with the relatively coherent trail to the right. 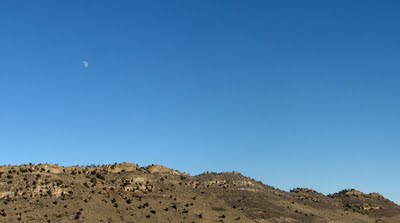 A sky without contrails, or artificial clouds, would have been standard not so very long ago. Here's a better view of the hogback, one of my all-time-favorite geographic features, showing the west, or scarp, face of the Dakota Group sandstones that create the ridge.

Posted for Skywatch Friday, where many more skies await you.

After four days of cold and snow, the cats have tired of the bird channel and are getting antsy being "cooped up." Elder Cat ventured out for a few brief moments—it's all of 5 degrees F (and -15 C) out there—then was happy to return to the woodstove.

At a glance outside this frigid morning, I can see:
(The Rosy Finch of Sunday returned yesterday, but I haven't spotted her today.) 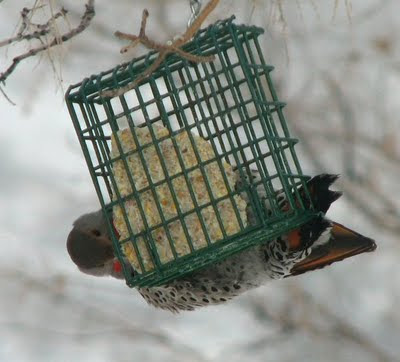 Not bad. If I sat and watched, I'd probably do better. Oddly, only a single Starling puts its species on this list. When I fed the chickens, I found out why: All of them, an entire flock, were inside the coop. By propping the door open, ducking my head, and making for the most distant corner, I was able to shoo most of them out. In cold weather, this becomes part of the afternoon routine, but it seems like there were 200 or so this morning. I wouldn't mind them taking shelter so much (who can blame them?), but in those numbers, they intimidate the chickens, devour their food, and foul everything in range.

Today there were a few dozen who were unshooable, trying to wedge themselves in corners. This gives me the opportunity to move them by hand, and them a chance to fly directly into my face and thereby also ensure in the panic of their passing that my winter coat is ready for the laundry. Just delightful; memories of Alfred Hitchcock come to mind.

The puzzle is how did they discover this cozy spot and how did they get in there? I may never solve the first, but there's only one way in. My imagination is challenged by the thought of 200 starlings marching up a ramp and into a hatch less than a foot square! 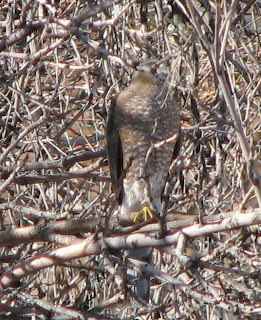 As is often the case here at FF, a snowy day means a great chance for bird watching. The feathered host was busy at the feeders early; scores of red-wings, the regular finches and juncos, a very busy place. When suddenly the view is reduced to nothing but magpies, expect to find a winged hunter somewhere about. Looking west, I was rewarded with a glimpse of the (or one of the) local Sharp-shinned Hawk. (This photo, however, is from a couple weeks ago.) 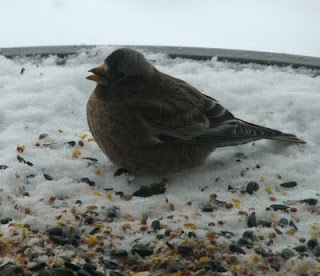 Today brought two unusual guests among the exceptionally diverse* hordes. The Husband called me to the window to figure out a cryptic visitor. Clearly a Gray-crowned Rosy Finch, but where were her companions? The only other visit we've recorded from these was a huge flock that descended from the sky during another white-out storm many years ago. 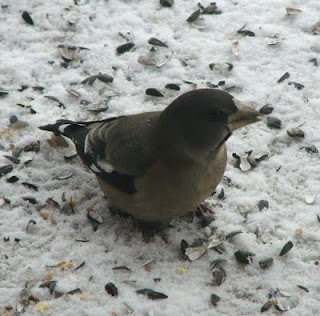 While we watched her, a female Evening Grosbeak , also solitary, dropped in again. It's only been three weeks since they last showed up, for the second time in as many decades. Kinda makes you wonder what's going on out there. 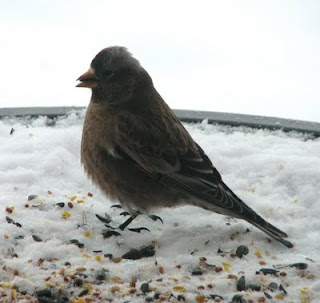 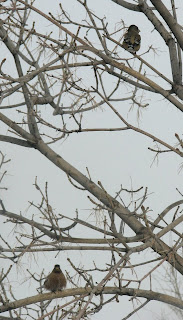 I'm not one to look a gift bird in the beak, though. I even managed, briefly, to catch them both in the same frame while they perched in the ash tree, though you have to use your imagination, or trust me on the ID.


More and better images of Rosy Finches, also more diagnostic, here at Google Images, as we clearly have a problem with backlighting, especially when there's snow.

*Husband also glimpsed ALL THREE Jays, Eastern, Scrub, and Steller's, in one quick view this afternoon, but the best I've done today is two. 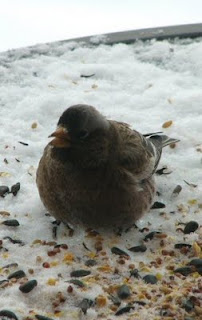 Flying about over the rock slides we see some plump brownish birds, with black, pink-tipped wings and tail - leucostictes, or rosy finch. Found in summer only above timberline and in winter seldom descending below 8,000 feet elevation. Four species occur in Colorado, one of which, the brown capped leucosticte, is not known outside of the state boundaries. The nest and eggs were unknown to science until a few years ago.
—from Denver Municipal Facts, Vol. 2, No. 3, March 1919

Labels: birds
Newer Posts Older Posts Home
Subscribe to: Posts (Atom)
Whether we and our politicians know it or not, Nature is a party to all our deals and decisions, and she has more votes, a longer memory, and a sterner sense of justice than we do. —Wendell Berry