Anticipations of spring, for me, don't truly come with anticipations of gardening, alas. I'm a gardener-wanna-be, perhaps too lazy-daisical for the true thrill of gardening. And that's a good thing, because if I was a gardener, after 30 years of living here, I'd be an extremely frustrated individual. Or perhaps I'd have mastered this inhospitable habitat, and would be the most sought-after expert in the field of Xeriscape®* gardening. Fortunately, I am neither.

Laziness, it seems, applies not only to my approach to gardening, but to my blogging! Very soon now, a new edition of Berry-Go-Round will be posted here at Foothills Fancies. Rather than creating a new post for my contribution, I'll be recycling one of my essays that outlines what I think is a very creative approach to gardening. It's posted over on Small Wonders**, where longer stories go. Unless you're completely committed to the hard labor approach, you might want to check it out.

*Xeriscape® is a registered trademark of Denver Water, who coined the phrase in the late 1970s.a It is, wikipedia tells us, a portmanteaub made from "xeri" (dry) and "scape" (from landscape).

aThe URL "xeriscape.org" now goes to "Colorado Waterwise," which wasn't delivering Xeriscape information for me earlier but seems to be fine now.

bAs defined by Humpty Dumpty, this is when "there are two meanings packed up into one word," which happens a lot in Jabberwocky, the poem he's explaining to Alice.c

c My goodness, it's amazing the things you can find on the web!

**When I started Foothills Fancies, my hope was it would keep my writing skills exercised. Small Wonders includes essays I wrote in the mid-1990s (and was paid for, speaking of small wonders!) that represent my only real body of creative work in the world of publishing. The essay linked here for BGR is one of the few that actually got me a response from a reader—she sent me some plum seeds!

Must Be Spring Is Coming!

The hens are laying again (and the skunks are squabbling under the coop), and today I heard a flicker calling for a lost (or hoped for) love. No drumming yet, happily. 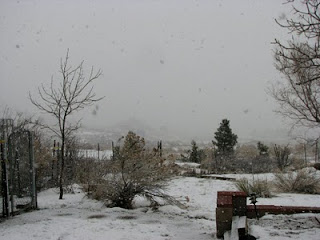 Never mind the snow that started about 2:15 this afternoon; spring is on its way. And one sign of spring is that Berry-Go-Round will be back here at Foothills Fancies next week. Please send contributions—yours or someone else's—to me at ffnaturalist. That's on gmail, which is a dot com. Or leave links to plant-related posts here in comments—by Friday February 26th, please.

Our part in this little saga began 24 hours ago, early yesterday morning when Dog #2 brought a frozen lump of something to the door. Upon examination, it was discovered to be the remains of a pigeon, headless and bloody but largely intact. I quickly put it out of dog-reach, intending to return it, only to discover within a half-hour that its owner had already been back to look for it. I wasn’t quick enough.

The Husband is convinced that Cooper’s Hawks aren’t carrion-eaters, but we now have satisfactory, albeit anecdotal, evidence otherwise. A disappointed Cooper’s Hawk stood on the discrete pile of feathers on bloody snow that marked his kill site from the day before. I ran to fetch his prize. Our resident friend watched me from a nearby tree, well, like a hawk while I replaced his frozen instant breakfast back where he’d left it Tuesday afternoon, exactly where he clearly expected it to be.

[Warning: Moderately graphic images below. How bad can it be? I'm pretty squeamish myself.]

But he didn’t return to it. Instead the presence of our smaller flocks let me know ‘Coop’ had left the area. Came the Magpies, observing the corpse from a distance, but not approaching. Perhaps some residual avian threat lingering with the carcass kept them at bay. When I left for the day, a couple hours later, it was still untouched. 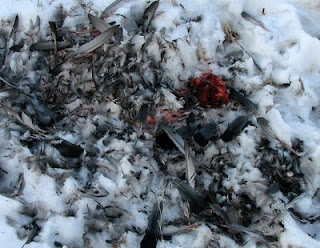 By late afternoon when I returned, the scene had changed. I first suspected the Magpies had overcome their hesitation, but something about the site suggested otherwise. The pigeon was reduced to a fist-sized red lump, consisting of a pair of feet, a dark red chunk of organ meat I took to be liver, and perhaps a piece of backbone. The feathers were now spread over a larger area, thoroughly but methodically dispersed. To me, the method suggested it wasn’t the Magpies who returned to finish this meal. 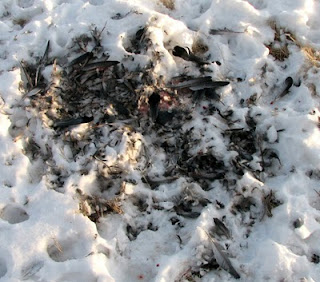 This morning I again stepped out without checking, only to see Coop flush from the carcass. Seems I have to learn to look first, so I don’t startle our guests. It no longer mattered; nothing edible remains.

I am NOT a Mouse! 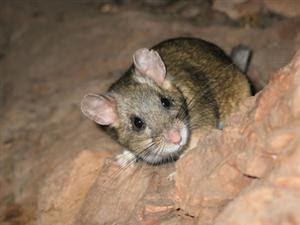 Okay, I know I'm cute, I get that, but please don't think I'm a mouse. (Smelly pesty little rodent...) Au contraire, I'm a "fastidious, beautiful animal" and "hardly deserve the negative stereotype most people have" of my kind. And that's according to the Colorado expert on such things. Photo credit: National Park Service.

When The Husband called me to look at a little critter jumping in and out of the chicken feed bucket late last month, I leaped to a quick conclusion. Despite my hasty conviction that the little guy is a Woodrat, I'm open to corrections. 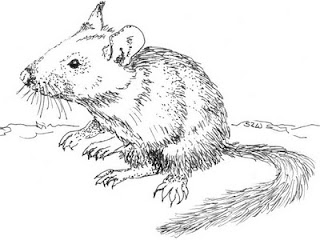 Historical Perspective: Back in 1877, while hunting dinosaurs near Morrison, Colorado, Arthur Lakes preferred the outdoor life:

For myself I still adhered to my tent life & adjourned every evening to my canvas dog tent pitched by the side of the stream. At last however after one or two snowstorms it became rather dismal to leave the warm stove and go out through the snow to the cold tent & so I cam in & for the first night slept on the floor but the mountain rats kept up such a racket that sleep was impossible. So I turned my tent into a swinging hammock & swung myself up into the rafters above the boys head.

In annotating this journal excerpt for a local publication, I wrote:

Bushy-tailed Woodrat (Neotoma cinerea)
Lakes' "mountain rat" is likely to be the bushy-tailed woodrat, better known as the packrat of western lore. Of some 20 species of woodrats in the west, five [six*] occur in Colorado. The other 15 species occur mostly in Mexico and Central America, where some subspecies are considered endangered.

The bushy-tailed woodrat, as its alternate name implies, is best known for its acquisitive habits. The Mexican woodrat occurs in southern Colorado and extends its range northward through our area, taking advantage of the milder microclimates provided by the hogback and adjacent foothills. The larger, more common bushy-tailed woodrat occurs well into the mountains and ranges from Alaska to Mexico. Woodrats eat a variety of plants, preferring the leaves, quantities of which are stored in crevices for winter use. Woodrats generally nest among rocky outcrops in vertical cracks, caves, or shelves, although they also use old mines and outbuildings, as Lakes discovered.

*According to my favorite mammalogist, there are six species of woodrats in this state: Mexican, gray, white-throated, eastern, desert... (I can't figure out his sixth from that article, and don't have his book handy.) Most sources I found neglected to distinguish among—or provide a scientific name for— the species, but here's a Colorado list, courtesy NatureServe:

Other sources do list a gray woodrat, the Southern Plains Woodrat (N. micropus), so that or the white-toothed may be the sixth species in Armstrong's list. I'm guessing these little guys are tough for a novice to tell apart. 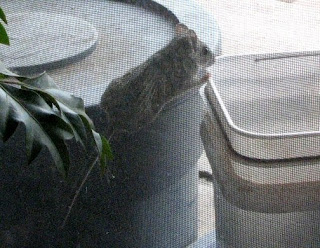 Meanwhile, back to Our Story:
As you can tell from the previous post, it took several tries before we were able to capture this little fellow at all clearly (window and screen notwithstanding). Mostly my shutter finger was not quick enough. I got several nice photos of the empty bucket, though. 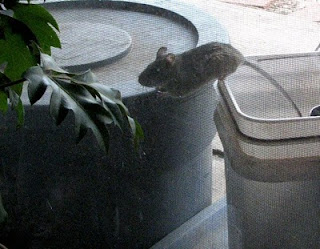 But as he traveled back and forth from the feed bucket to the stash many times, we were finally able to catch him going in... and out of... the bucket. He was quick!

(The feed bucket is 9.5 inches/24 cm in diameter. Armstrong says the smallest Colorado species of woodrat is 12 inches/30 cm long. Is he including the tail? I can't imagine a local rodent more than 12 inches long, except rock squirrels and marmots. Anyway, bigger than a mouse, for sure.) 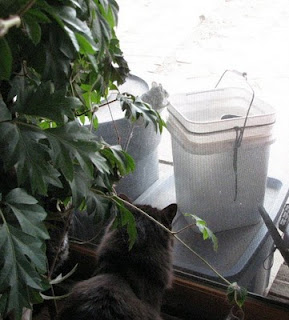 We weren't the only ones appreciating the show! The cats, trapped behind glass, enjoyed it even more!

The first personal encounter I recall with woodrats was a sad one many years ago. A woman, startled by the appearance of this creature in her brand new foothills mansion, captured it in a glass canning jar and brought it to the museum where I worked at the time to get an ID. Without punching holes in the lid. Horrified, I told her what the freshly suffocated creature was, but was not nearly as welcoming as I would have been with most visitors. An educational opportunity lost: I suspect she never set foot in the place again!

For some time, we've known that woodrats occupied the peripheral spaces of the chicken coop. Sometimes I even see (more often, hear) them in the ceiling or under the floor when I collect eggs and count beaks each evening. Occasionally one of the cats leaves a half woodrat on the doorstep. Last week, the entire ceiling of one part of the coop collapsed, exposing a collection of mummified lilac twigs complete with leaves, chewed foam panels, nesting material, and a vast accumulation of waste material. We were on our way to a veritable packrat midden. 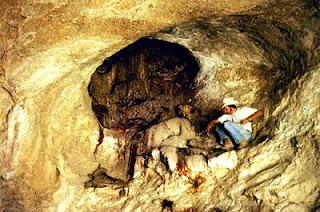 Yes, woodrats, aka packrats aka trade rats, particularly in the southwest, are benefactors to humankind. Their middens, one of which is pictured here, are archeological time capsules that record vegetation, climate (via pollen trapped therein), and other conditions dating back as far as 40,000 years! Being fastidious, as Armstrong says, they deposit their refuse in discrete areas, where it accumulates to form deposits that are almost geologic in scope. Cemented and preserved by crystallized urine, the mass is capable of preserving most anything in it and, thus, a boon to researchers. More on this photo.

Our woodrat continues to live under the front step, where I hope he will elude the cats, live long, and prosper. He still enjoys sunflower seeds and chicken scratch, although to date he's shown no signs of leaving us any shiny baubles in return.

Nice writeup on the Colorado species of Neotoma.

Species of concern, on Univ. of Calif Santa Cruz campus, which has some good photos of the "stick-pile" nests they build when not living in rocky cliffs. We saw a lot of these in the deserts of Arizona.

Okay, it must have been a really lousy photo. I'm awarding the prize to Swampy, at Swamp 4 Me, who at least got it to the right Order (Rodentia). Thanks, everyone, for chiming in! Swampy, send me your address to claim your original historic postcard of this fabulous local spot where you can see packrat middens. 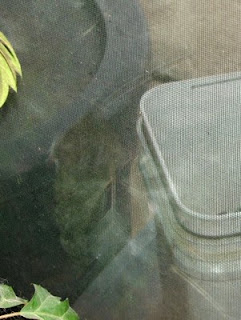 Simultaneously displaying my amazing skills as a wildlife photographer and giving you a little something to puzzle over this morning-- check out this terrific shot from last week.

Got ideas? I'll be back later with the full post, just packed with information and (yes, promise!) better photos. Oh, guess I'd better be thinking of a prize for the first correct guess, too. Hmmm...
Posted by SLW at 10:33 AM 4 comments:

Labels: critters
Newer Posts Older Posts Home
Subscribe to: Posts (Atom)
Whether we and our politicians know it or not, Nature is a party to all our deals and decisions, and she has more votes, a longer memory, and a sterner sense of justice than we do. —Wendell Berry