The Pied Junco: Nature and the Individual

So I thought I’d share some random thoughts about the individual in nature.

Biologists like to think in terms of species, the members of which are pretty much indistinguishable cogs rollin’ along on the wheels of evolution. No, that’s not it. Biologists know that each and every individual (in sexually reproducing organisms at least) is genetically distinct, it’s just that they believe the important thing is the species, or the population, but never the individual. I always had trouble with this concept in school. I mean, if every individual grizzly bear or Pawnee montane skipper dies, that’s pretty much it for the species as well.

Trouble is, most of the time it can be pretty hard to tell one mule deer or crawfish from another. Partly because we’re not looking closely enough, and with wild animals it can be difficult to look closely. And partly because they can in fact look pretty uniform. An individual would have to be remarkable in some way—we have to be able to distinguish him or her from others of like kind. Ornithologists accomplish that by banding birds; herpetologists clip toes; mammalogists use tags or toe clips; cattle ranchers might use numbered ear tags. All to make the individual songbird, lizard, mouse, or cow unique and recognizable.

We concluded, based on repeated observations and a few markings, that we are seeing the same sharp-shinned hawk several times a week. Behavior is the most convincing reason—“she” uses the same perches, same hunting habits, whenever she visits. Could I recognize “Artemis” in a side by side comparison with another immature hawk of her species? Doubtful. 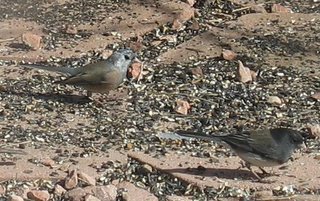 But the pied junco (left, with a normal individual of slightly different color pattern), yet unnamed and likely to remain so, is visibly unique. He or she, let’s say he this time, is a “dark-eyed” junco of the color pattern that used to be known as the pink-sided race of the Oregon junco. Except for his white-blotched head. That sets him apart from his peers. Every time he visits, we will know he’s here as soon as we spot him, but his companions will remain anonymous no matter how familiar they may be.

We'll continue this another time...
Posted by SLW at 8:42 AM