Not the "real" thing, but real in their own right, certainly, Douglas-firs confused botanists for a long time after they were discovered by western science. Collected in 1792 somewhere in the Pacific Northwest, they were first thought to be pines, spruces, or firs. In fact, Douglas-fir is in a class by itself, and 75 years later botanists gave it a new genus name. For our species, they settled on Pseudotsuga menziesii in honor of its discoverer, Scottish naturalist Archibald Menzies. 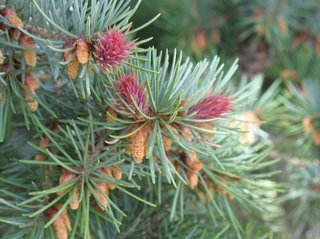 On our hike at Eldorado Canyon May 7th, I saw these early cones, seemingly for the first time. More likely I never paid attention before, but the deep magenta female cones just jumped out at me this time. Tiny prototypes of the finished "fruits," these are probably still awaiting fertilization by pollen from the orangish male cones also visible in this photo. 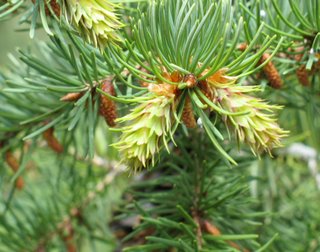 Just across the trail, same day but in a sunnier spot, cone development was much more advanced. I'm not sure with Doug-fir, but some conifers take years to mature their cones. These, I'd guess, ripen from birth to seed in one season.

As always, click on the picture for a closer view. More on Douglas-fir here.
Posted by SLW at 12:36 PM