There are Two of Them! 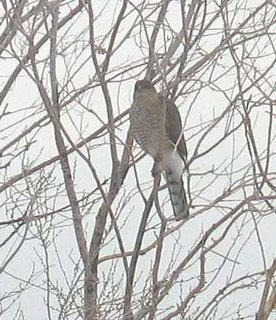 We've been watching young Artemis, the local sharp-shinned hawk since the spring equinox post that launched this blog, so three-quarters of the way around the year. She visits when it snows, so this picture was taken when she stopped in last week. After the Nov 30th snow, she came by to kill a scrub jay by the coop, then, next day, a junco under the lilac bush.

She has, in recent months, lost the white spots on her back. 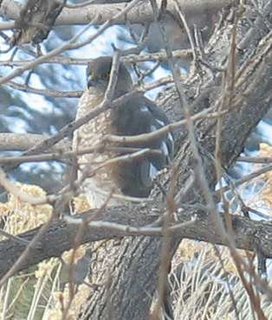 So the spots told us that this sharp-shinned hawk, now dubbed Speck, was a different bird. Many of the neighbors have now reported seeing these small hawks, but we'll have to hone in on which sightings go with which bird.