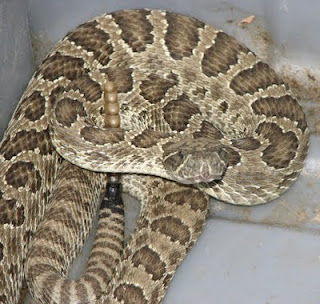 One visited while I was gone early this month and was dealt with by the Darling Husband... but Number Two arrived the day after I got back, on August 10th.

Here she is, awaiting relocation, and none too happy about it. If she only knew the reception she'd find at most homes in our area, she'd stop complaining. 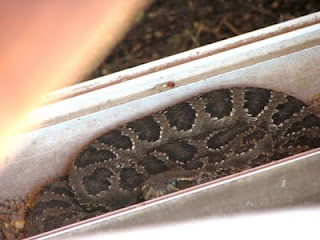 The dogs found the first two,* but I found the next one all by myself. Number Three of 2009 was curled up in the chickens' feed trough on Saturday, August 22. He didn't look too happy with me, though I certainly kept my distance, as did the chickens, until DH arrived to help corral him. He, too, found a new home not too far away.

*They've both been quite the snake-pointers ever since #2 Dog survived a bite back some years back. Or, I should say, #1 Dog points, #2 Dog runs for the door.

As you've probably guessed, we have a nonagression treaty with rattlesnakes. I'm not finding that to be common, but I have encountered some folks who agree that they should be allowed, most often, to go about their business, as they will if we exercise a little restraint.

They're certainly unnerving, though. I'm never sure their intentions toward me and mine are as friendly as mine toward them. (Come to think of it, these two look a lot alike! Hmmm....)

How many more such surprises before cold puts a temporary end to their visits?? How much longer should I walk, mindful of their potential presence every time I'm outside?

Good for you and good pictures too.

Here in Ontario we only have one rattler, the Mississaga, but it has become very rare. Part of the problem is that it is in cottage country and many people kill them on sight although they are protected (and are very non aggressive.)

Yours look a bit more lively.

Beautiful! So many people don't take the time to do what it takes to co-exist with wildlife. I am happy to learn that you do.

Good for you and your husband....that is very forward thinking these days. So many people let their fears guide them. I am still trying to convince my husbands family to leave the timber rattlers alone that reside on a farm we own in Andrew Co. Missouri. I'll just keep working at changing their policy of "the only good snake is a dead snake" with any luck one day they will see the light.

I love rattlesnakes and finding them makes me happy - doesn't happen too often, but when it does I get really excited :)
Thanks for helping these guys out, they're good lookin' snakes!

I admire what you're doing with relocation instead of killing. I thought I read that they were getting sparse in some areas of the southwest because of all the killing and habitat loss. I don't have to deal with them here in WNY....Michelle