Beginning with Monday's Redtail-magpie episode, the week has focused on hawks. Wednesday morning, another magpie fit drew me out to look at the same elm, and I was rewarded with a view of a Cooper's Hawk hopping from the ground to a low branch of the magpie tree with what I hope was a starling in hand. 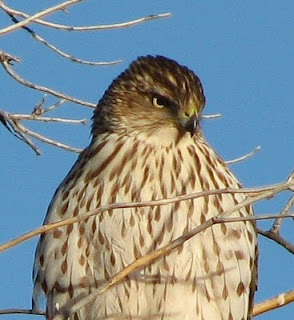 The easy pickings around our feeders usually draw immatures, so we're having some trouble being certain, from quick looks, whether we're seeing Cooper's or Sharp-shins at times. (See what you think: photo left from this morning.) Telltale signs, best seen in the adult, would be the squarish head, roundish tail, and less streaked breast of the Cooper's, all relative and dependent on getting a good look. And of course, larger size—but that too is proving to be hard to judge except at the extremes. Males can be quite a bit smaller than females in accipiters, causing the three species (Goshawk being the third) to overlap in size.

Yesterday morning, for example, a hawk I took to be Sharp-shinned (and, one hopes, our familiar Artemis) was the first bird out, and her presence kept the others hungry and on guard for a brief time just after dawn. The magpies went into vociferous hawk-mode in the afternoon, showing us what we thought was Cooper's again. Having a resident colony of pie-birds is proving an aid to observation!

Photo credits for this morning's good look go to The Husband. Finally, someone who's not camera-shy: She/he sat in the Russian-olive for a full half hour, while the light changed from rosy to standard Colorado-bright.

My slide show idea didn't work as well as I'd hoped, so scroll below for an almost animated sequence. Looking right, left, and down—where's breakfast! First four around 8:45 in early light; last four around 9:15 a.m. 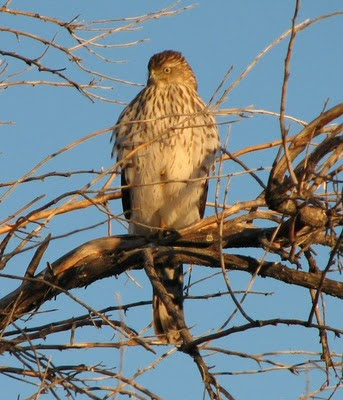 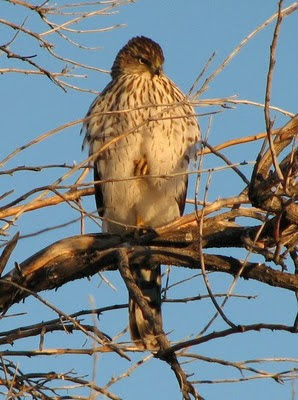 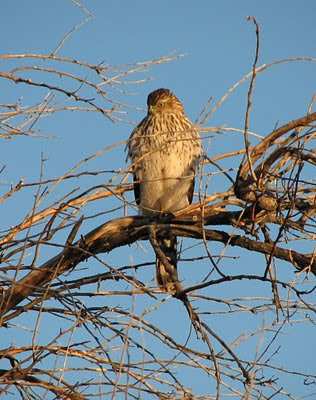 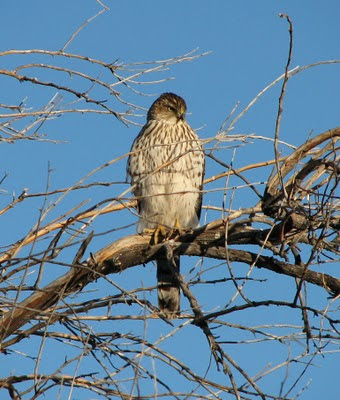 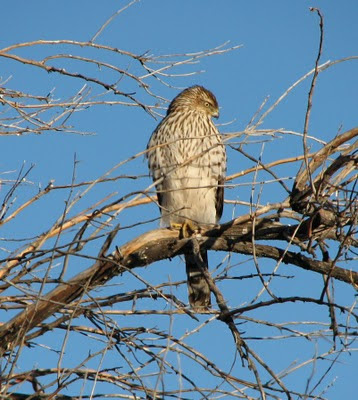 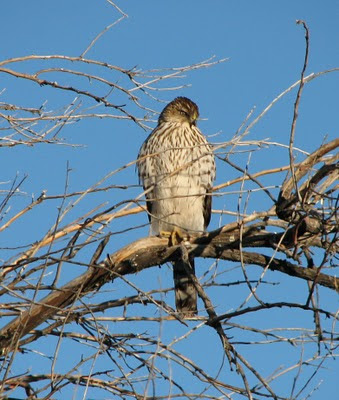 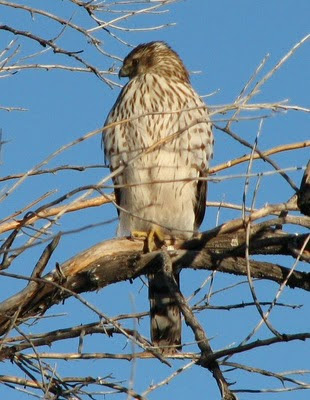 Consulting our old friends Niedrach & Rockwell (1939), I find this:

Owing to its characteristic habit of perching close to the trunk of densely foliaged trees, this species is inconspicuous. It is seldom seen any distance from tree growth. A few pairs nest regularly on the table-land south of Denver, where, in June 1937, Bailey and Niedrach secured photographs of adults and young in their nest among the scrub oaks; others build in the evergreens near Bergen Park and south of Idaho Springs. Cooper's hawks are very fast upon the wing, and as they are not particularly shy, are often observed over the city. A few winter, but the majority leave for the south by the last of October, and do not return until early April. This hawk is a large edition of the sharp-shin and because of its size, takes much larger game. Near habitations it is a persistent poultry-killer, and consequently has aroused the animosity of farmers.

The latter, if true, should have me fearful for the chickens!

Cooper's for sure - square-ended tail. Sharpies have rounded tails.

Wow. Kudos to The Husband- wish I could get shots like that!