The second spring storm of the week arrived Tuesday night, and Wednesday was another big "digging out" day.* Some days it seems like the forecasters are getting better. They pretty much hit this one on the head; it hit us just as scheduled. These spring upslopes (see below) must be easy for them.

Tuesday was a fine spring day, warm and sunny, til about 4:30 p.m. when the air got fuzzy. An hour later a full-on blizzard was in effect, sideways snow and all. Stomping out to lock up the chickens was great fun! 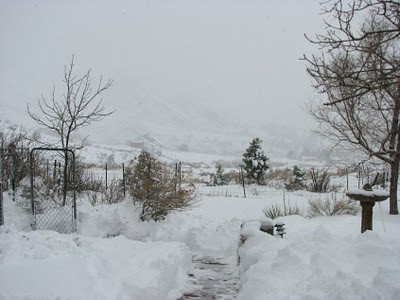 Wednesday morning, it was quite lovely, for those who don't have to be anywhere. (As almost everything was closed, that meant most of us.) We have a foot (30cm), give or take, but by 8:30 a.m. (above), paths were shoveled, feeders were filled, suet was hung by the ash tree with care, and the birds were well content. 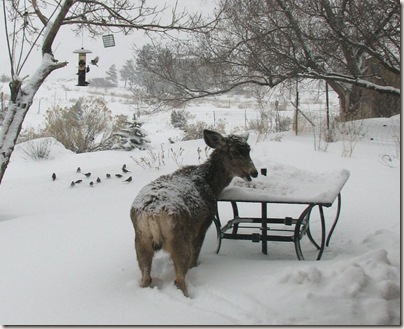 The first bird to arrive was the BIG one... "Hey, I put that out there for the other birds!" 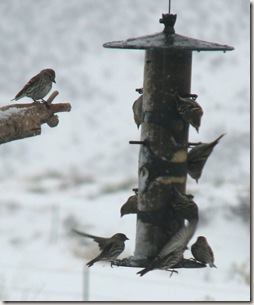 The siskins were at their acrobatic best early on, even before we refilled the "upside down" feeder. Fuller feeders means fuller perches, and sometimes a waiting line forms nearby. Patience rarely prevails; they're so feisty jostling for spots that it's almost impossible not to catch them in the air! 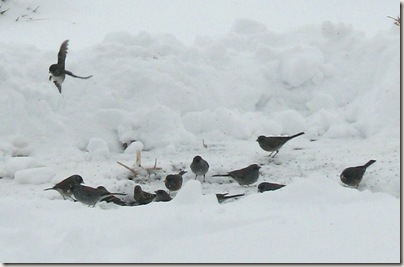 Even the juncos were lively and quick! I always worry they'll disappear without a fare-thee-well one of these days. But the Last Junco isn't just yet.

What's the story with "upslope" storms?
This time of year, each low pressure system that crosses Colorado creates a huge counter-clockwise vortex of moving air. Here's Colorado, a giant postage stamp of a state with a swath of high mountains running through the center.

This low, Tuesday night, circled the whole state. It scooped up moisture from the Texas/Gulf end at the south and threw it up against the Front Range, right about here at Denver latitude. Meanwhile, nice cold air just happened to be moving down into the state from Wyoming and north-abouts.

And BAM! Here we are, digging out from under stuff that weighs at least 20 pounds per shovelful! By mid-day, sun was out and roads were clear. The piles will last a while longer...

*Blogger wouldn't cooperate with the longer post I worked on most of the day yesterday, so this is an abbreviated (and less immediate) version. Title refers to the 9 inches of snow I missed over the weekend, all of which was gone by the time I returned Sunday afternoon. Here's this morning's updated view. 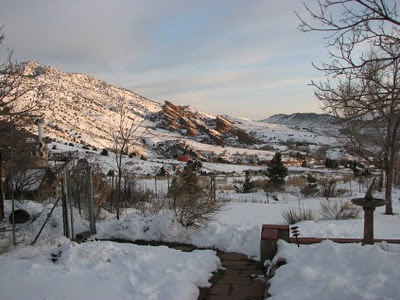 I know! I visit it on your RPL quite regularly... sigh. Thanks for stopping by, Hugh.

Sally- are those your own Awesome Graphics? Nice job!

They are. Thanks, Watcher. I rather hoped, as my "Awesome Graphics" mentor, that you'd like them.