The Week That Was: February So Far

January's last gasp was almost tropical, with clear skies and shirt-sleeve weather most of that last weekend. The groundhog brought change, for sure, this time! The cold started on the 31st, and we (and the groundhog) were in the deep freeze on his day, with the added touch of several inches of snow. Mind you, I'm not complaining (especially after lamenting December's lack of moisture in any form). I was lucky, I got to stay home feeding the woodstove and keeping the chickens in liquid water (or trying to) as we spent a couple days in the teens below zero.

The slideshow covers the past two weeks, starting with the brown views of late January, and ending with this morning's sun shining on a foot of new-fallen snow that began arriving yesterday morning. By 10 a.m., it will be above freezing and I won't have to worry so much about the chickens' thirst. Colorado blue skies have returned for the moment, though more snow is expected tonight and tomorrow. 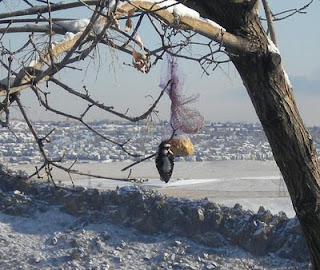 I did worry about the birds, most of whom flocked to the feeders. Food was no problem; they had plenty of that, but I was out of suet. I invented a substitute of sorts, that immediately attracted a little Downy Woodpecker, but she soon lost interest. Even the starlings didn't find it tempting. Finally, I fed it to the more appreciative chickens, once proper bird suet arrived.

I tried to provide the little birds with water too, but it was rejected. Juncos, finches, and assorted sparrows foraged inches from the dishes without indulging. Everyone looked like little puffballs, all fluffed against the cold.

Both Sharp-shinned and Cooper's Hawks have also been coming by regularly. (I'm finally getting better at telling them apart, at least when the size differential is visible.) I've found little evidence of their success, but they keep the little birds on their toes.