As long-time readers (if any) know, the weather used to be a frequent topic of conversation around Foothills Fancies. Thanks to The Chemist, it may be again. Last week he handed me a great little book, with the comment that he'd throw it away if I didn't want it. You know how I am about throwing things away. I've been reading it avidly ever since. 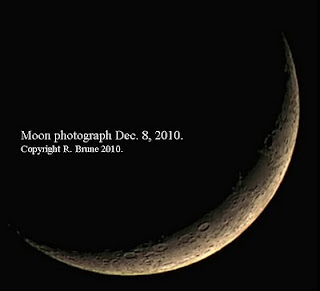 When I read page 47 of this cute little book, I knew I wanted to write first about weather and the Moon, especially because we broached the subject not long ago. I asked The Chemist for help again, and for a "slight fee," he provided this incredible image, taken Wednesday night between 5 and 6 p.m. local time. With the Moon less than 15% full, we have here a lovely waxing crescent.

How did he do this, you ask? The Chemist reports: "I went up on Genesee Mountain last night with that in mind. Unfortunately, there were thin clouds covering the moon so I couldn't get the best pictures. I did take about 300 in 3 series and the attached is a stack of the best 67 images from one series. These were taken with my Pentax dslr and 400mm telephoto." The fee will be paid in pizza, I think. 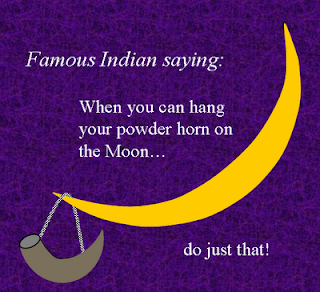 "When you can hang your powder horn on the moon, do just that." So says the weather wisdom compiled by Eric Sloane in Folklore of American Weather (1963). This one is attributed to "famous Indians" who apparently hunted when the ground was wet from recent rains. They saw this Moon as a dipper, that could either hold or release water. I would guess that powder-horn-packing Indians are a fairly modern development, or perhaps this is an updated version of an ancient saying once applied to quivers or bows.

In either case, this weather sign is not very reliable, says Eric, but the saying stuck with me because the idea of a Nonhunters Moon, especially following so close on the Hunters Moon of November, was appealing, giving the woodland creatures a little break from pursuit.

Right now, however, many weeks or even plural months since a reasonable precipitation event, we're tempted to believe that this bowl of a Moon IS withholding moisture from our foothills! It is dry, dry, dry... and a few snowflakes last night did nothing to change that. The storms that have made the mountain ski resorts deliriously happy have done nothing for us whatsoever.

Eric Sloane and the Weather
The name sounded familiar, so I had to check him out. Eric Sloane is more famous as a landscape painter than for his weather-wisdom, although he has plenty of credentials in the latter. As a painter of clouds, skies, and American pastoral landscapes, he "sought out the abandoned and nearly forgotten treasures of our early American landscape." At one point, he was painting airplanes, and skyscapes with airplanes, in exchange for trips into the wild blue yonder. Gradually in his paintings, the airplanes got smaller and the clouds took over the canvas. "Who'll buy pictures with just clouds?" his friend asked. One answer: Amelia Earhart.

Credited with initiating the concept of televised weather forecasts, Sloane also turned to old farmers' almanacs and diaries in search of weather wisdom. This led him to promote a philosophy of awareness that was based on the kind of insight early [European] Americans, especially farmers, had to develop to begin to understand this new climate in which they found themselves living. Their understanding of stable British (and other European) climates didn't travel well across the Atlantic Ocean to the fickle New World. Although some of their observations, like the one above, don't hold water, others were found to be perfectly sensible and reliable. We'll explore some of those in future posts.

The person of the 18th century, Sloane argued, was not a more intelligent, enlightened, or better person than his 21st century counterpart. He and she was more adept at being content in their pace, relative level of self and community reliance, and in their better understanding and acceptance of their locale within the stream - be it metaphysical or metaphorical - of time.—from Eric Sloane's Philosophy of Awareness

And Our Lady Moon?
Never be it said that you can't learn anything from blogging. It was just a couple years ago that I came across the simple statement: "The full moon rises at sunset and sets at sunrise." It was something I'd probably never thought about, but... how else could it be? Have you ever seen a Full Moon in the daytime? Why not? Where is the Moon when it's New?

If this is news to you too, play with the idea a little, and you'll figure it out. Stretch out your arms and point one at the Moon and one at the Sun. A Full Moon is always, and must be, 180 degrees from the Sun. Contrariwise, when we see a Half Moon, our arms will be at a 90 degree angle.

Here's another tip to play with: When you can cup the crescent Moon in your right hand, it's waxing. When you can hold its curve in your left hand, it's waning. I've struggled to remember which is which, but that's the simple formula.

To learn something more concrete with this post, I'm taking a stab below at labeling the features we see in The Chemist's terrific photo. I'm no astronomer, and this is a pretty wild guess, but it seems to match the maps I have. I am looking forward to being corrected by someone with better knowledge!! 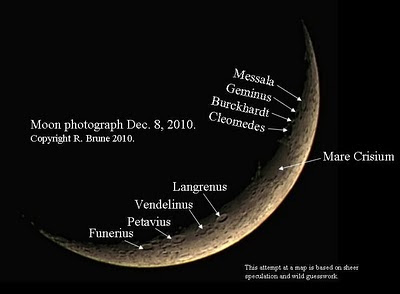 Let me get this right - was the Chemist going to throw away a book by Eric Sloane? Well, if so, it could not have ended up in better hands.

You have it exactly right, Mary-- I guess I wasn't very clear about the book. I'm enjoying it-- stay tuned for more Sloane revelations!

Thanks for stopping by...

Great post- I never knew any of this folklore, but will be paying attention over the next couple of (waning) weeks!

BTW, speaking of the Moon- don't miss the eclipse tomorrow night. (Though I fear you'll have the same cloudy skies we will here on the other side of the hill...)