How native is native? We have to applaud the trend toward using more native species in efforts to reclaim natural landscapes after disturbance, don't we? Sometimes, unfortunately, the gesture backfires no matter how well intentioned it may be. Such was the case several years ago (about 2006?), when the Town of Morrison built a water pipeline through the local open space park (Mt. Falcon). 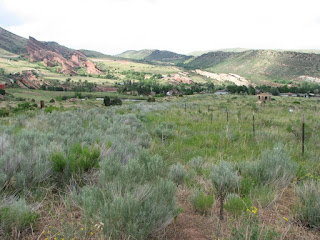 I'm sure the fact that the pipeline was going through publicly owned open space rather than private property simplified the approval process considerably and probably also stimulated the desire to plant native species so the pipeline would blend in. You be the judge: how did they do?

This photo was taken last June, many years after the project was completed. That swath of blue through the landscape gives this post its title.

The Plantlist shows 25 accepted subspecies or varieties of Ericameria but my botanical consultants, the Chemist and the Propagator, tell me this is likely to be Chrysothamnus speciosus var. gnaphalodes Greene, which is a synonym of Ericameria nauseosa var. hololeuca (A.Gray) G.L.Nesom & G.I.Baird. Native it is, but to northern NM, AZ, and most of Utah. The USDA profile shows his Colorado distribution as only in our county, a tad disjunct for a native, wouldn't you think? 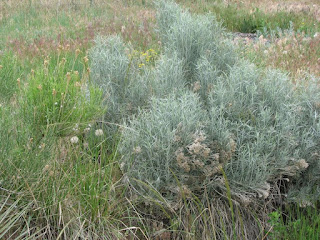 Plantlist also reports “the genus Chrysothamnus contains no accepted names.” Shucks! I knew the genus had been changed, but I haven't quite accepted it yet. (Chrysothamnus has served me well during more than 40 years of acquaintance.) Sorry, botanical friends, I lean more and more toward "common names," the ones they always taught us were unreliable and unstable. Besides, I'm taking a broader ecological view rather than a taxonomic one, and it seems clear to me that this guy is a proverbial sore thumb who just doesn't belong! The gestalt simply doesn't fit. (In this photo, he's overwhelming the little green rabbitbrush guy on his left.)

You can explore our native rabbitbrush a bit further at this previous post. I mentioned the species's wealth of associations with insects, and our friend Ted at Beetles in the Bush provided this detail in the comments: 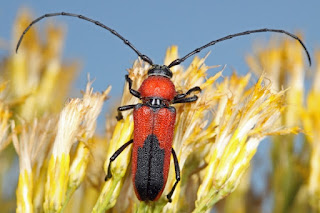 I love this plant because of the fantastic variety of cerambycid beetles (genus Crossidius) - large beetles with long antennae and vividly colored black and yellow, orange, or red - that visit the flowers. Like the plant they feed on, the dozen or so species show a dizzying diversity of forms (about 3 dozen subspecies are formally recognized) across the western U.S. 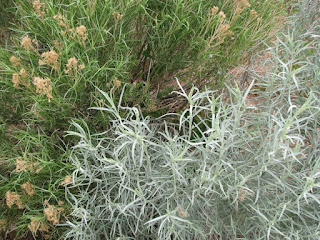 That's about one unique form of beetle for every unique form of this plant species in the western U.S. They say that a central tendency of ecological thinking is always to ask "and then what?" So I'm asking: what does bringing one new plant, subspecies or not, into a landscape bring in terms of insect associates? And what, pray tell, are the implications of that? As they also say in ecology "You can never do just one thing."

What does this mingling mean? CDOT is using this blue rabbitbrush on local highways. You can check it out along Hwy. 285 between Indian Hills and Conifer. Besides being an experiment in plant (and insect?) breeding on a regional scale, it's messing with what we perceive as "natural," perhaps as much as planting exotics. (Not advocating a return to that, though, okay?)

Along for the Ride 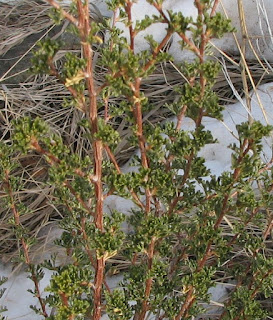 I don't know exactly what they planted, but blue rabbitbrush turns out not to be the only new face in the local landscape. There are other "natives" too! Native—but "improved"—cultivars of little bluestem (Schizachyrium scoparium, formerly Andropogon scoparium) and sideoats grama (Bouteloua curtipendula) are springing up in the roadside ditch downhill from the open space (along with blue rabbitbrush). No concerns about their fecundity! And recently, when the Husband and I followed the blue road down into the park to walk the Dogs, I found this treasure, which might be cliffrose! (Cowania stansburiana; now, apparently, Purshia stansburiana) If that ID is correct, it's far from its home in southwestern Colorado and Utah, but will certainly be an attractive addition to our local flora. Looking at the bright side, our species richness is expanding!

——
Thanks to the Chemist and the Propagator for consultation on this post. They are not to blame for errors and goofy opinions expressed herein.

You can, of course, explore the range of diversity of rabbitbrush further at Wikipedia or at the USDA Plants database.