The Husband and I are reading, each in our own separate book. We are so intrigued by these two books that we even read passages out loud to each other, a virtually unprecedented move. This morning I was struck by a sudden intersection between the diverse ideas that landed us squarely in the realm of human (and especially American) psychology.

He's reading Michael Pollan's book In Defense of Food. Pollan illuminates the fat phobia that has driven a massive experiment on the American diet in the last thirty years. In fact, we have changed our diets, and (he explains) not for the better: after adopting the claims of nutritionists, we are no more healthy today than we ever were. Across the pond, James Lovelock argues that we have a similar phobia centered on nuclear power, a phobia he considers unfounded and harmful. In The Revenge of Gaia, he demolishes the claims of "renewable" energy sources and postulates that only by adopting nuclear power can we avert imminent climate catastrophe.

So, it would seem, here we are: our environments, internal and external, are now threatened by habits and beliefs we have been persuaded to adopt only in the last three to five decades. Yes, indeed, most interesting, especially perhaps to a generation that grew up protesting having someone else's ideas shoved down its throat.

Food is our most personal and intimate interaction with our external environments, and no one would question that our food decisions can wreak havoc on the planet. But I particularly appreciated Lovelock's perspective on our fears of nuclear waste:

Wild plants and animals do not perceive radiation as dangerous, and any slight reduction it may cause in their lifespans is far less a hazard than is the presence of people and their pets. It is easy to forget that now we are so numerous, almost anything extra we do in the way of farming, forestry and home building is harmful to wildlife and to Gaia. The preference of wildlife for nuclear waste sites suggests that the best sites for its disposal are the tropical forests and other habitats in need of a reliable guardian against their destruction by hungry farmers and developers.

Now that, friends, is delightfully perverse. That is, it seems to contradict our intuitive understanding—until we somehow learn that Lovelock is right. Fear, even irrational fear, provides great protection for natural areas.

I wasn't involved in 1992 when the Rocky Mountain Arsenal, a Superfund site, became a wildlife refuge here in Colorado, so my enlightenment came later, in the struggle to prevent the commercial development of Rocky Flats. The Cold War was over, and the market for plutonium triggers was crashing. The Rocky Flats weapons plant was situated between Denver and Boulder, high on a rocky plateau. Post-war (II) wisdom suggested it be surrounded by a large "buffer zone" to protect neighboring communities, thus the plant site itself occupied less than 10% of the 6,240-acre (2,525 ha) site. Almost ten square miles of mostly undeveloped land was, and is, a rarity in this part of the Front Range. Developers were eager, to say the least. 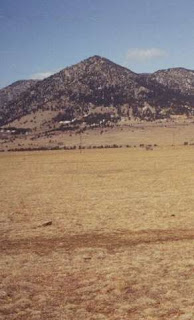 In the 1990s, the buffer zone and adjoining properties also became the focus of local efforts to preserve a pretty significant ecosystem, the tallgrass prairie. Encroaching development on the east and mountain uplift to the west pinched this plant community into a narrow zone along the foothills, in front of what we call the "mountain backdrop." Thanks to the rocks, the area had never been plowed (it remains, however, too vulnerable to gravel mining). Chronic, sometimes vicious, winds kept it from being overly attractive to settlement or development. This land surface, the Rocky Flats Alluvium, is the oldest undisturbed surface in Colorado.

We made many field trips, most to a spot outside the official buffer zone, but sometimes we signed documents, gave up our cameras, donned dosimeter badges, and toured the inside as well. What made it a special treat was long views across the expanse of prairie, the opportunity to find new and unusual plants, and, above all, the absence of people and cows. This was grass that hadn't been grazed by domestic stock for more than 30 years! The sense of solitude, and tall waving grasses around us, gave us the illusion of traveling back in time. The guards in the towers with rifles didn't make much difference: they watched us just as closely when we were outside the fence.

By June 2004, access had become easier, and teams of scientists and volunteers conducted a 24-hour Bioblitz in the Rocky Flats area, recording almost 1,400 species of living beings in this 10-sq-mile sample of mixed grassland. Click on "All the Species" at the above-linked page for a list of the results. Don't you wonder what we'd find if we looked at other places this closely!

Soon it became clear that hundreds of acres of native tallgrass prairie, unusual plants, and healthy wildlife populations would not be enough to save this area from development—but public fears of radioactivity could help. In 2005, despite protests, the area was designated Colorado's newest National Wildlife Refuge, with the Dept of Energy retaining management of a central core to mitigate safety concerns. Although people can visit to hike and view wildlife, many of those who commented on the refuge proposal during the years of negotiation will continue to avoid the area because of health concerns. And that's just fine with 1,396 species of plants, lichens, fungi, insects, spiders, other arthropods, birds, mammals, and one fish!
Posted by SLW at 8:03 AM

Oh, my, that is all very choice! As I recall, the islands that were cleared of people before use as bomb testing sites shortly the tests became overrun with plants & wildlife, as appears to be the case in the area surrounding Chernobyl.