Lovelock again: "At least 90 percent of us in the first world now live in cities or in suburban areas around them. ... Because our lives are so wholly urban, democracy ensures the election of governments almost entirely out of touch with the natural world."

Now there's a new criterion for judging candidates, unfortunately it would most likely eliminate all of them. 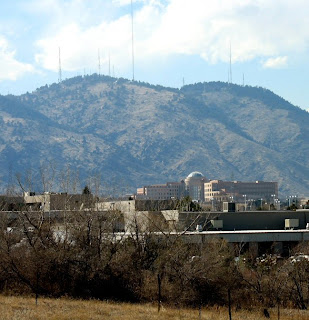 Here's what we've done locally with our little corner of one of the grandest views in North America: the contact between two continental scale physiographic regions, the Great Plains and the Rocky Mountains. That's a car dealership in the middle foreground, and our county seat of government behind it, fondly known locally as "The Taj." A testimony to the sensitivity of governments to native ecology. As are the communications towers on the mountain behind.

Which of our candidates (at any level election) ever spent time in the woods as a child? Which of them remembers it?

(Dare I even mention that most of the trees in the foreground are Chinese elms?)
Posted by SLW at 7:49 AM

I was reading the current edition of "I and the Bird" and wound up here. You have a great blog(s). I'll be back later to read more. We used to live in Borger(north of Amarillo in the TX panhandle). When we had a 3 or 4 day week-end, it was off to the Rockies to camp. We live in Ft. Worth now and don't get up there as often. Summer-before-last we spent a week in RMNP. It was great to be back.
Troy and Martha in Ft. Worth

PS: I'll add you to my "Check-it-out - Favorites Blogroll".

I couldn't agree more. There is a complete void of discourse about anything environmental from the (now) three presidential candidates.

I remember sometime ago when there were still like 5 or 6 candidates I did a quick check of all their websites for any hopeful nuggets.
I don't get to hear their speeches, after all.

At that time Obama had the most "enviro-text" on his site, but it seemed like it was mainly geared to carbon reduction. The others had MUCH less to sink one's teeth into. I'm pro-Obama, but I don't think he's standing out because he has a jazzier website.

I guess between the economy and the war the rest of the air is sucked out of the room?
Short sighted, indeed. I think we stand at a real crossroads as a nation when it comes to how we care for our world. I'd love to see leadership from someone (anyone). Where are they?

Thanks for stopping in!

TT-- If you see this, I've added a new spider we need your help with... see Hairy Legs Alert.

Dave-- I did enjoy your hedgerow post, and think hedgerows are a great invention. Unfortunately, more and more of them seem to be exotics (like autumn olive and multiflora rose)... Thanks for your comments on the election; I agree about the lamentable dearth of environmental discussion. I'm trying to resist commenting, lest I go overboard!

Unfortunately, many people who have grown up in the city are desensitized to seeing towers and car lots. Such a shame. Nice post but you and Dave Coulter have gotten my blood hot again.