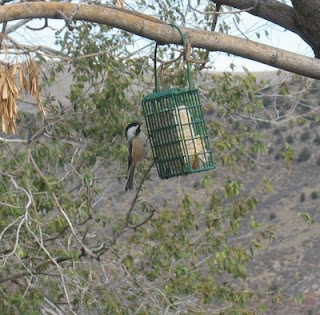 The suet feeder was empty (again!) yesterday, and the Chickadees seemed disappointed. They are always the first ones up in the early morning, snatching sunflower seeds before it's even very light out there. A few days ago it occurred to me their tiny beaks have trouble getting to the suet, especially after the Jays, Magpies, and Flickers have shaved it down to a sliver, like a well used bar of soap.

So I cut a chunk off a fresh cake and used it to force the suet against the holder. In seconds, they were back and clearly delighted, as four of them showed up at once. Squabbles ensued, but mostly they seemed content to take turns. One little guy/gal even found a crumb on the ground, and flew away with it. 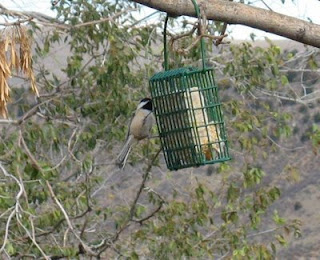 Chickadees are an easy bird to "favorite"—their antics are life to them, but endearing to us. And they always seem so cheerful...

Aldo Leopold considered them one of his favorites too and observed them carefully on his farm in Wisconsin. How, he wondered, does such a tiny bird survive winters in Wisconsin? Read more on this at Small Wonders, my second essay published in the Upbeat series long ago.

Thanks for the Small Wonders pointer. Chickadees, along with housefinches and goldfinches are the most common visitors at our feeder here in Salt Lake right now and wow, I had no idea the winter mortality was so high. I always think an interesting study on a winter-resident bird like the chickadee would be the evolutionary impact of feeders over 50 years or so. Maybe in my next life as an ornithologist!