Heisenberg again. You never know how outcomes will be affected by observation. Yesterday, glancing out the front window, I saw a strange visitor. Another "never before"... so naturally I reached for the camera and took a few shots. 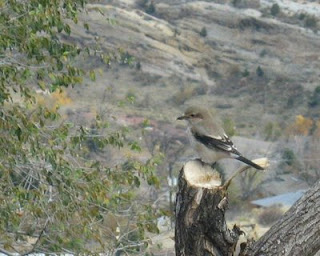 Seeing that beak, and something about the general configuration, led me to suspect "shrike." After checking the bird books, I'm thinking Northern Shrike, a rare bird I've probably only seen once before, perhaps in Wyoming. A juvenile, with barred chest and faint mask, this one was very alert and perhaps too curious for his own good.

Unfortunately, but perhaps true to his predatory kind, after this shot, he/she flew straight at me and into the glass. And sat stunned, on the ground, as I mentally assessed the whereabouts of the cats and dashed outside to see if I could help. The bird fluttered away, as the young cat who happened to be outside dashed up to "help." Grabbed cat, bird fluttered around the corner of the house. It was getting to be quite a chase.

With the cat secured indoors, I went out the front, toward the driveway, scanning ground and trees without sighting the bird. Turned to go back into the house, and there he/she was, on the doorstep. I'd walked right past! I circled wide, went in by another door, and watched nervously for 20 minutes more. Was it my movement behind the glass, or possibly the camera flash, that drew his attention into danger? Did curiosity—his and mine—almost kill the bird this time? I felt responsible for his predicament. 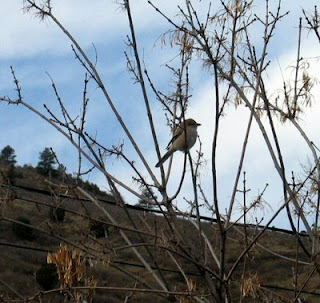 Finally, wits collected and feathers rearranged, the bird flew up into a small ash tree nearby, warily allowed a couple more photos, then took off with, we hope, a new life lesson learned for all time. Windows...

Northern Shrikes, one bird book says, come south by hundreds periodically when "cyclic population crashes of voles in Canada" occur, about every five years. Maybe we'll be lucky enough to see more. Maybe I should start looking for impaled prey on local hawthorns and barbed wire fences. At least I'll know what not to do next time I see one.

We both went on with our days. I hope his held no more excitement. Mine did, with a heartwarming ending last night that, we all pray, marks an inspiring new beginning for this country of ours!
Posted by SLW at 7:10 AM