You Promised Me Snow! 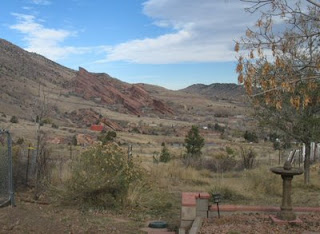 Although we've been enjoying the mild weather, once again we are disappointed on the precipitation front. (No pun intended.) Didn't you say last night there'd be 3 inches of the white stuff this morning? What happened?

Remember last week, when Telluride and the West Slope got 18 inches, and the eastern plains got a big dump too? That storm apparently just skipped right over us. It's almost mid-November, for heaven's sake—surely you could have found us something measurable by now. It's 62 degrees out there right now, what's up with that? That's at least 10 degrees higher than what you folks say is our "normal" average high for November!

The Husband mentioned a few days ago that one of your people reported we were 10 inches low on precipitation so far this year. You know we only get about 16 total. We should have at least 15 of that by now!

I don't mean to complain, exactly, but I'm starting to get worried about the plants and animals out there who depend on a little moisture now and then. And did you see those grasshoppers this summer? They stripped my hollyhocks and lemon balm completely. I haven't seen it like that since 1981, when they defoliated all the lilacs. (They're recovering, thank you, but I'll never see that thyme again.)

Remember, too, that old Arabian saying: All sunshine makes a desert. Thanks for sending clouds, at least, today.

You know that normally I'm an easy customer to satisfy, rolling with the punches as it were, but if things don't change soon, I'm afraid we're going to have to take our business to someone a little more reliable!

All the best—
Foothills Fancies

p.s. It sure is nice not having the chickens' water frozen every morning, though!

I hope you get your snow soon...

sorry, me again, One Deep Breath was replaced by One Single Impression, which has become a general poetry prompt rather than strictly a haiku prompt. I miss One Deep Breath too,