Coyote Semilla: Plant of the Week

In my head I still hear the pronunciation given by the 8-year-old Latina I encountered long ago in Arizona, who authoritatively informed me of this plant's name the first time I saw it.

At the risk of exposing my linguistic inadequacies, we'll do the name first. The word coyote simply must be given the proper 3-syllable twist she gave it (perhaps reflecting the original Aztec): coy-oh-tay. The 2-syllable American (ki-oat) and its monosyllabic Texas variant are as unacceptable here as the longer American ki-oh-tee. Now if only I could wrap my tongue around it as smoothly as the child did. 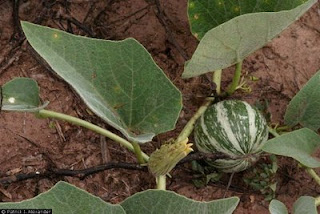 Semilla, though, is Spanish through and through, as far as I know, and derived from the Latin. It means seed (English speakers, think "seminal"). When you see a baseball-sized dry fruit all over the prairie, you have encountered this plant. When green, it might resemble a small watermelon, but in that state you're more likely to notice the leaves before anything else. They will be bright blue-green, almost a foot long, and arrayed on vines that sprawl widely, carrying those coyote seeds hither and yon. And they, the leaves, will smell to high heaven (hence the species name). In all, a very impressive plant.

That's one reason, I guess, why we were discussing it at First Friday the other night, when several botany geeks I know get together for pizza and chat. Yesterday, Bee Lady and I went on an expedition to try to gather a fruit from the only place I know of in our county where this plant grows wild. We found the shriveled vines and leaves, and but one fruit. We took a few seeds, and left the lone gourd to finish rotting in peace. In such moribund condition, the plants weren't even worth a photo.

We chatted Friday night about how or whether the plant was used by native peoples (yes, it was!), and the Chemist reported that the rind of this fruit contains the most bitter substance known to humankind. Doesn't sound too appetizing... After we left our wild patch, we hied on over to his house to gather wildflower seed from his excellent native garden. He has gourd plants, too, but without fruit. Why not? Bee Lady speculated that, in town as he is, he lacks the appropriate pollinator. Could be—the nearest reported distribution for Coyote Gourd is several counties away to the south or the east. 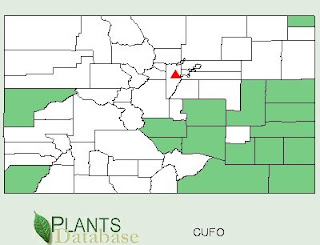 We are somewhere under the red triangle. So how did it get here? A little botanical mystery. The plant site is near an old townsite, which may or may not have overlapped an earlier Indian site ("evidence" for which comes from spirits by way of psychics, but that's another story). So it could have been brought here, planted even, by humans. Or it just could be that the database, which includes only formal records (e.g., herbarium specimens), is incomplete—the plant simply hasn't been collected and reported to those who keep track of such things. Or both.

thank you very much site