In Search of Jelly Lichens

Last week I took advantage of TWO opportunities to play hooky and go looking for jelly lichens at my favorite location. It had rained over the weekend, so I knew they’d be happily soaking in the humidity.

Bee Lady and I also reveled in springtime humidity as we enjoyed the sights along the way to the best cliff in Lair o’ the Bear. Spring is brief in Colorado, making it very important to play hooky this time of year!

I hadn’t visited for a while, so had to check every cliff to find the right one, way out at the west end of the creekside trail that was once the main road from Morrison to Evergreen. 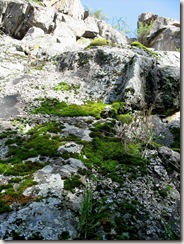 Maybe this cliff, with a vertigo view from shady-mossy base to sunny exposed rocky-top?

No, lots of neat things to see, including this little spring beauty growing in a cushion of moss—but still not the right cliff! 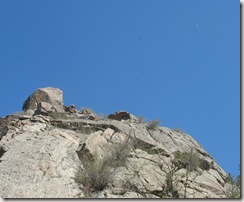 Was it this cliff, with the Violet-green Swallows cavorting above? 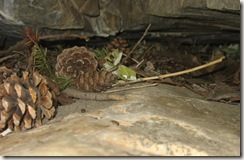 No, but at the base of it, in a crevice, Bee Lady spotted a Woodrat nest, composed (on the outside at least) mostly of pine boughs and cones. 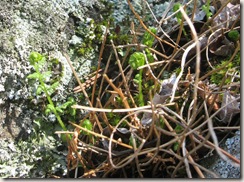 This also turned out to be a good place to see the unfurling croziers (love that word!), or fiddleheads, of new ferns. I guessed brittlefern, Cystopteris fragilis, based on later specimens, but as these were too young (for me) to tell, they might also be Woodsia. 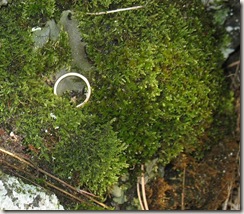 Eventually we reached the proper cliff, where we could see not only the sought-after jelly lichens, but the wonderful Sticta, and verdant masses of spikemoss, Selaginella. The jelly lichens were soft and slimy from recent rains and lingering rivulets in the cracks and crevices of the cliff. Here a large Umbilicaria (lichen) under the ring, with Selaginella to its right, and masses of true mosses surrounding. 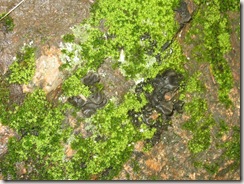 By now, my camera was acting up, so I failed to capture good examples of the very critters I’d come to see. Properly called gelatinous lichens, these guys are so named because they lack the firm texture of more typical foliose lichens and have a characteristic translucence. They remind me of the “tree ears” we sometimes encounter in Chinese restaurant dishes, but those are actual fungi. Gelatinous lichens are unstratified or only partially so, lacking the distinct algal layer, and sometimes the firm lower and/or upper cortex found in the “typical” lichen (if there is such a thing). 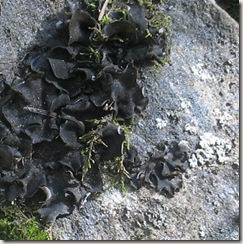 They look so different when they’re dry! This one is, I believe, a species of Leptogium, with a white tomentum visible on the lower surface. Perhaps L. saturninum, but confirmation will have to await another trip. With a hand lens. For those who prefer common names, LoNA* calls this one bearded jellyskin.** (Ugh!)

In related news, gleaned from the Nature Blog Network’s blog, President Obama now has a lichen, Caloplaca obamae, named after him. Congratulations, Mr. President! This is also a great story about the citizen scientist, Kerry Knudsen, who discovered this new lichen, proving again that dedicated people can make a real contribution, if they just pay attention to what they see!

* LoNA is Lichens of North America, the coffee table book of lichens, by Brodo, Sharnoff, and Sharnoff. Highly recommended; you can visit it online, though, at Lichen.com.

** Jellyskin is the name used here for the entire genus of Leptogium, as opposed to the name “jelly lichen” given only, in this book, to species of Collema, another common jelly lichen. This is the only book I know that assigns common names to lichens; very few lichens have real common names.

Nice lichens & fungi! Like that selag too.I haven't seen it here yet, but didn't even know about it till the high country was snow-sovered las Fall, so I'll be looking for it this year.