The dictionary insists it's a noun, but we often use it these days as a verb. This post is a little tribute to a mentor who made a huge difference in my life by inspiring, at a relatively early stage, an enthusiasm for field ecology: Dr. Paul D. Kilburn. I was a biology major in an upstate New York college when a friend suggested a summer field excursion to Colorado. We went, and four weeks later, though I didn't know it at the time, I was bound to become a Coloradoan.

Three of those weeks were spent learning the Colorado flora, with Paul as instructor: identification, montane ecology, and alpine ecology at one week each. In Rocky Mountain National Park! That foundation formed my career in the 1970s and '80s, and my passion in these later decades, though sometimes rarely exercised. 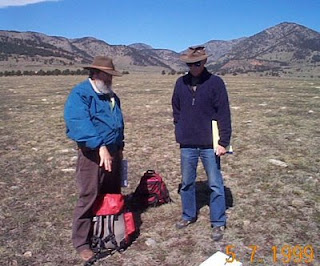 But this isn't a nostalgia trip, this is to tell you what Paul has accomplished now! After ten or twelve years of struggle (through the 1990s), I got busy and abandoned our joint attempt to save an important chunk of native tallgrass prairie in the northern part of our county. But the foundation was laid, and Paul persisted. Last week he made some significant headway, almost 10 million dollars worth, toward protecting and restoring what's left of an important grassland ecosystem. Here's Paul, right, with Dave Buckner, ten years ago today, in a nice chunk of prairie that was purchased by City of Boulder Open Space and is now protected. Dave's a consultant with whom we launched a 5-year grassland study—paid for by the aggregate interests—of the native warm-season grasslands at Rocky Flats. 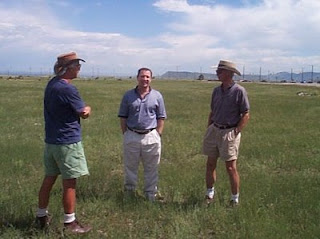 This photo shows the Chemist, left, and Paul, right, in July 1999 with the Developer who knows his chunk of this well preserved prairie is going to be very remunerative for him, as it is situated at the intersection of two important highways, soon to be a major beltway bringing traffic to his door—if development interests prevail. (Here we bless the economic "downturn" for breathing space.) 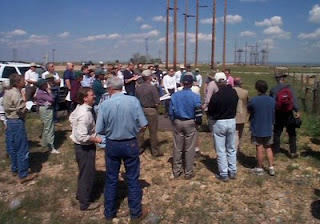 In 2001, Paul (far right) led this field trip to the site of a proposed oil well within the boundaries of a portion of the grassland that had been placed in a "Stewardship Trust" by the State of Colorado (which owns Section 16, a state school section). One of the uses for the $10 million will be to purchase certain mineral rights in the Rocky Flats area so that other parts of this grassland won't be turned upside down in a quest for... gravel, bluestone aggregate. Happily, most of Rocky Flats, once a weapons plant, is now a wildlife refuge, so areas inside the fence are protected from pretty much everything except mineral owners and weeds. 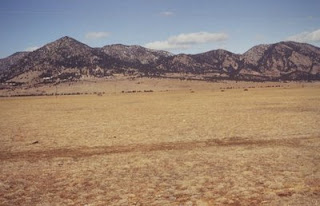 Paul's been fighting the good fight, as well as leading groups to collect native seeds for revegetation and pull invading weeds, ever since those early days. Why does he do it? I think it's so his grand-children—and yours—can enjoy sights like this! (Tallgrass prairie in fall, looking toward the foothills.) 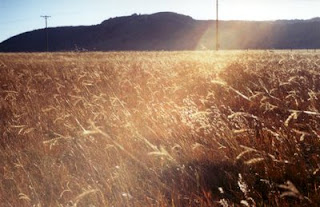