One of the things I notice about reptiles, in comparison to birds for example, is they’re so quiet! That probably contributes to the notion people have that they’re sneaking up on you, inspiring that zero at the bone sensation Emily Dickinson describes so well.

It also means we have to be more observant this time of year. I think of rattlesnakes now, every time I’m out in the field, trying to be more conscious of potential hiding places. Apparently a child was bitten last week on Morrison’s main street, so it’s officially snake season—and they can turn up anywhere.

For some reason, as I drove home Friday, I wasn’t thinking of snakes. My mind wandered, and I had to slam on the brakes near our driveway to avoid hitting a nice young 3-foot Bull Snake. Time to start carrying a stick in the car again for moments like this. I found an old stalk of yucca and spent a few minutes encouraging her to leave the right-of-way where she preferred to bask in peace. Should have just picked her up; the bite is harmless and not that painful, and she seemed mellow, but why court trouble? By the time I returned with camera a few minutes later, she had disappeared as silently as is usual. [No, I have no idea whether she was really female, but one has to choose, “it” is just impolite.]

Happily, another opportunity presented itself later in the afternoon. We were sitting in the backyard when the Husband picked up the sound we dread. Rattlesnake! Starbuck, the snake-pointer, heard it too; he went on alert, showed us the spot, and barked to let us know he was holding this intruder at bay. (He has a special bark just for unusual occasions, most often a snake. He's also turned up one box turtle and one tomato worm. Very exciting.) Husband checked, diagnosed “No, Bull Snake,” and we all breathed a sigh of relief. Once the dogs were inside, we got a closer look at my second bull snake of the year. 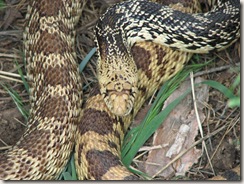 Bull Snakes (Pituophis catenifer) regularly imitate Rattlesnakes (here Crotalus viridis), and, as they look somewhat similar, many people confuse the two. To me, Rattlesnakes just look mean; something in those ridges over the eyes gives them a brooding sinister look, like crocodiles. Chris, at Coyote Crossing, has a nice picture of one of these “sweet and noble animals.” Good story, too.

I like rattlesnakes too, long as they’re not sneaking up on me! I like to know where they are. Rattlesnakes are, of course, one of the few reptiles that let you know where they are. Sometimes. I bet 90% of the rattlers I encountered when I lived in Arizona never made a sound. My theory is that rattling, these days, is behavior that can cause you to lose your head, and  thus we humans have been deliberately selecting for rattlesnakes that prefer not to rattle. That’s why it pays to keep your eyes open too. Here's a prairie rattler recording, for reference. 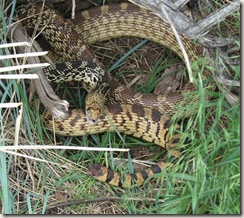 Back to our visitor: What was it the Husband heard, if not a rattlesnake? Bull Snakes can mimic the rattle of their model by shaking their tails in dry weeds, but also by hissing. This was the first time I’d heard a wild bull snake make a sound so much like a rattler, so near perfect I didn’t believe DH at first but had to see for myself. As we discovered, hissing was the only “vocal” opportunity this snake had; an accident had cost him the last few inches of his tail.

As long as we can see the whole snake, or most of it, a little attention to detail increases our comfort. The overall gestalt that says Bull Snake includes a long streamlined body (as opposed to the stockier form usual in rattlesnakes), a narrow innocent-looking head blending into a neck of similar dimension (unlike the so-called “triangular” head and narrow neck of rattlesnakes), and tapering pointed tail (rattles blunt the tail tip, even in young rattlesnakes). Stocky is relative. Bull snakes are our biggest snake here in Colorado, so they can get very hefty when they reach a length of 5  or 6 feet (1.5 m or more). The girth of this one was probably 7 or 8 inches (17-20 cm). A rattlesnake that big around would be much shorter, maybe 3 to 4 ft (1 m). Of course, rattlesnakes’ eyes also have vertical pupils, unlike the round ones in the mimics, but do you really want to get face-to-face with one to check that feature? 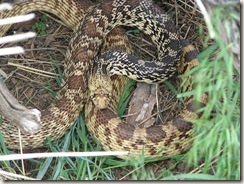 Behavioral cues contradict visual evidence. Wild Bull Snakes may be harmless, but they’re determined to make you believe they’re dangerous villains. They can hiss, “rattle,” coil, and strike in very aggressive fashion when cornered. Here he’s got his neck pulled back warning of a fast strike that will make you jump no matter how cool you are. Too often, such tricks get them killed, eliminating the ecosystem services they provide, such as rodent control, and, I’m told, rattlesnake control.

Most people are willing to believe any patterned snake is a rattlesnake.  This little baby Yellow-bellied Racer (Coluber constrictor mormon) was found at the local 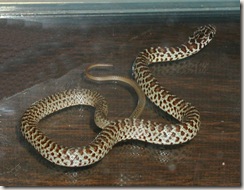 elementary school. They called us at the museum: “we’ve got a baby rattlesnake, help!”
These guys are even called “pugnacious” in the guidebook, so it’s easy to believe, again, that you’re dealing with a dangerous predator. Even at 15-18 inches (+/- 40 cm), this little fellow was a handful. Jace at Nature Journals describes the rattlesnake-mimicry racers will perform. I’ve never seen them tail-buzzing myself, but then I’ve never tried to confront one in the wild as he describes in his last paragraph. For a nice collection of photos of juvenile and adult racers visit California Academy; the adults are completely different. After our photo-op, we returned this little guy to a safe place a little farther from the school. 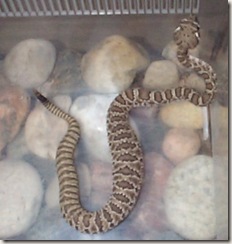 Here’s the real deal. A baby Western or Prairie Rattlesnake (Crotalus viridis) looks about the same as the adult and can vary in color from gray-brown, as here, to yellow or greenish. This baby has recently had a big meal.

Diagnostically speaking, note the narrowness of the neck compared to the head, and the black tail near the rattles.

The rattlesnake I encountered at the chicken coop last summer was a clear green. Just lovely… as long as I knew where he was. Thankfully, that one did rattle at me. To this day, I still expect to see him every time I go out there, now that it’s spring.

By the way, a good resource for Colorado reptiles and amphibians is the Colorado Herpetological Society, especially their identification guide. Extensively updated since my last visit, it’s a great site.

Hmm....we're not really in snake country in this part of the state. Southern Illinois is another matter - they're all over the place down there!

How exciting! We love snakes, and are soon to make an expedition to try to see our first wild Timber Rattler. That Bull Snake was simply beautiful -- and it's fascinating how they'll imitate a rattle.

We really enjoyed this post -- what a great encounter! =)

Gee, Dave, I'm sorry you're "missing out"... you must have garters, at least. Did you mean just, no rattlers?

K&R: glad you enjoyed it, thanks! Be careful; timbers hide in leaves, right-- tough to see?

Loved this post! I'm fascinated by snakes and your post has motivated me to get on the ball and start better IDing them.

BTW, I read a few years back (can't remember where) about an experiment where they placed fake snakes on a road, and watched what drivers did when they approached them. More drivers tried to HIT the snakes than avoid them!

Tell me about it! I think the entire Colorado herp guide was written based on road-collected specimens. What are people thinking?

Guess that's why most of us get to see more dead snakes than live ones. Sigh.

Just wanted to say "hi" from another Colorado blogger! I found you when I searched snake images on Google - just wanted to make sure that thing I saw this morning really WAS a bullsnake. Well, I'm up to about 97% sure and that will have to do! Thanks for the link to the Colorado ID pages, too.

I stared at my little visitor sleeping in the shade from a few feet away, but unfortunately wasn't wearing my glasses! Came back with them and a pair of binoculars, but he was gone.

My hubby wasn't happy at the harmless snake I found in the yard. He really wouldn't like to live in an area where this was possible.... My Hoh...

Exaggeration is to paint a snake and add legs

I didn't know that bull snakes imitated rattlesnakes. I'm excited to see that; we have both in NE Oregon too. I have special tongs for humanely removing rattlers from my garden.

Love the photo of the baby rattler.