Plants, as a group, display such a variety of incredible qualities and, yes, behaviors, that it would be impossible to list them all! One of the things I enjoy about the internet is its connectivity, and we could easily explore that quality in plants as well. Last week, though, in two clicks, I found myself at a delightful homage to the wonders of the Plant Kingdom. (Yes, I know that's old fashioned terminology, but you do know I'm stuck in the past, right?) And it reminded me of these photos I want to share with you.

Today's quality to admire in plants is resilience. To me, perhaps few demonstrations of the power of life over death impress the senses the way a plant (or entire plant community) recovering from adversity can. 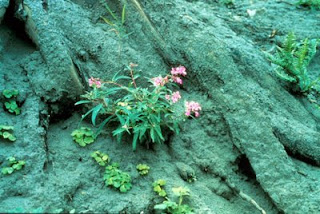 Adversity can strike plants in many forms, but these photos tell a story that most of us don't encounter in person: recovery after burial in volcanic ash.

Here's the caption, from the USGS website where these photos from the public domain are available free of charge.

The new vegetation, in this case, is a plant of fireweed (presumably Epilobium angustifolium or another species; the genus is now Chamerion), something that looks like Oxalis, and a robust-looking fern. 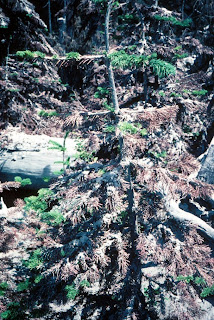 This little tree (a fir perhaps?) is one of the lucky ones.

July 16th, the day the photo was taken, was just two months after the catastrophic eruption on May 18th.

Historical aside: I was writing that week to an uncle of mine, a Baptist minister, and I called it "the geologic event of the [20th] century" in a rambling philosophical letter that noted the eruption was less damaging, in terms of human lives lost, than the race riots that were keeping Miami police busy at the time. (Later, the eruption's death toll outdistanced Miami's.) Uncle Art and I conducted a lengthy correspondence in 1980-81 debating the value of Nature vs. Humanity. It was a wonderful meeting of minds, neither of which were permanently altered. We agreed, in the end, that it was a Good Thing different people had different priorities. 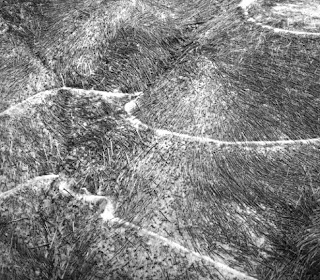 These trees were not so lucky. No ash slowly suffocated the life out of them; their demise was instaneous. It's been more than 28 years, though. The forest, we can hope, was more resilient than the trees. It would be nice to see what it looks like today. (I really recommend you click on this one for a closer look.)

USGS caption: Within a few minutes, hurricane-force winds from the May 18 lateral blast of Mount St. Helens transformed vast stands of evergreen forest into drab tangles of giant matchsticks. The trees were stripped of their branches, toppled, and "combed" into patterns. The logging roads shown here are about 12 feet across. This view is near Elk Rock looking east. Photo by A. Post. Cowlitz County, Washington. June 30, 1980. Figure 34, U.S. Geological Survey Professional paper 1249.

What happened to that "delightful homage" I mentioned? Okay, now you can go check it out and be amazed at the abundant adaptations apparent in the world of our green friends, the plants:

Botany Without Borders, brought to us by Love Plant Life.

What a fantastic tie-in! We're very interested in plant resilience after volcanic activity in New Zealand and plants in geothermal settings - we have quite a lot, and there's some beautiful images in here

Thanks so much for the mention

Sort of makes one start to believe in GB Shaw's Life Force, doesn't it!

I too am itching to get back to Mt. St. Helens. I visited in 1990- lots of 6-8 ft tall saplings, but still destruction everywhere. Millions of gray trunks lying on the ground, pointing in the same direction. Can't wait to see what's happened since.