Care to take a Dip? 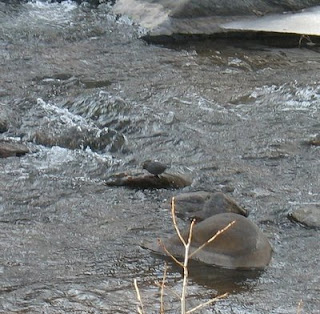 Mountain streams are icy this time of year, but that doesn't matter to the Dipper. He's a plucky little bird unlike any other in this—or any—neighborhood. So nondescript in coloring that he's hard to spot (or she, the females look the same), but a delight to watch if you find one. Can you spot this one? If not, click to enlarge, that might help a bit. 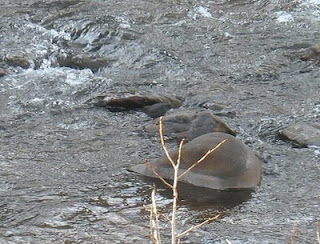 On my walk by Bear Creek a couple days ago, I saw two dippers chasing each other along the stream, chattering all the way, but they were too preoccupied to sit still and be photographed. (Is it mating season already? A territorial chase between males, perhaps?) I prefer their alternate name, Water Ouzel; has a ring to it, don't you think? 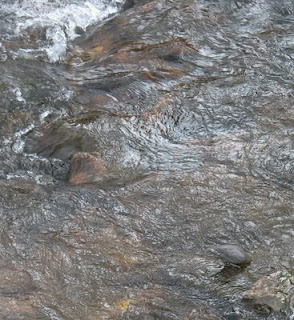 Yesterday, with camera along, I found just one that was willing to demonstrate their unusual lifestyle. I wish this little sequence of photos could capture the Dance of the Dipper—constantly bobbing up and down on his rock, then popping into the stream where he walks around underwater looking for shiny morsels of food. He can also fly underwater. Moments later, he pops out somewhere else. These little guys are absolutely unwettable. Like a cork with legs, he suddenly appears on another rock, upstream or down, and begins the dance again. Dippers mostly forage underwater, but sometimes they stand on a chosen rock and pick insect larvae with only their heads under the water. They can forage on the bottom of streams so fast and deep a person could not stand. 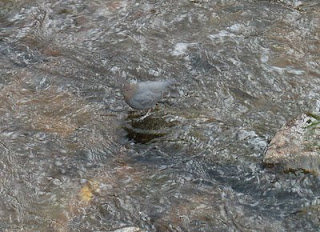 Dippers, Cinclus mexicanus, are the only birds in their family found here in North America. They naturally nest on wet mossy cliff-faces, but have benefited from new nest sites under our bridges and other streamside structures. The effects of pollution have been less beneficial, reducing their food sources, which are similar to those of trout. Healthy dipper populations, then, are indicators of high-quality mountain streams and good trout habitat.

More on dippers at the Cornell Bird Guide. The local Audubon group, the Evergreen Naturalists, has named their website and newsletter after this delightful little bird.

——
This one goes to Life Photo Meme, which publishes on Thursdays. I have trouble finding things that match their themes, but I love their concept! This week's theme is "Shiny"... Maybe the water is shiny enough?
Posted by SLW at 7:26 AM

It's shiny enough for me! Great post. It must have been fun to watch the bird do its little dance...

Wow, what a super-cool bird. I never noticed it before, but the range map shows it in my mountains too. I'll keep an eye out for it next time I head up the canyon- thanks!

Thanks, Brine Queen! I really liked your beluga too...

Watcher, I should have mentioned the most interesting range of this little guy-- will update the post soon. I hope you see one; you just have to be a riffle-watcher.

Great post on the Water Ouzel Sally (I never knew that name before)! Aren't they an amazing bird? Can you imagine being able to forage on the bottom of a stream that a person can't even stand up in? Wow.

I have seen them in our local rivers and streams and have always been in awe of their toughness. You wouldn't catch me in those freezing mountain streams!