The Birds of April

Once again, I'm launching a new feature here at FF. Given my track record, I just know I shouldn't say that!

This time, it's a monthly compilation of visiting and resident birds. This is that transitional shoulder-season, when winter friends will disappear without a fare-thee-well, and returning guests show up to delight and amuse us. Any day now, the Hummingbirds. We must be prepared! 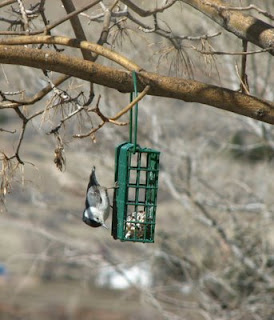 We have some newcomers this month, some "never befores" to report, like the one in this photo. And I'd never thought to take the camera to the mailbox with me, but would that I had today! I'll probably never see again this never-before bird, nor ever be sure of its identity.

April is not over, that we know. But here's the list so far... let's expect a few more before the month is out! Most were at the feeders; a few obvious ones (Vultures and Eagles, for example) were not. Never-befores (only one this month) are in blue.

That's 27 total, and the migrants haven't even arrived yet! Links go to those whose photos have been previously posted. 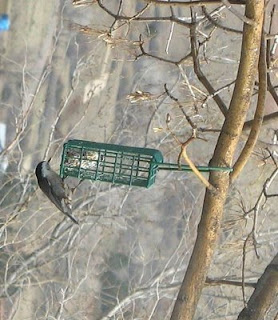 The White-breasted Nuthatch was unexpected, not having popped in before. (She's acrobatic, but not as much as Blogger would have you believe. Gravity still prevails, even here. If anyone can tell me why Blogger occasionally does this or how to overcome it, I'd be grateful.) She has become a regular, at least for now, checking the suet feeder periodically over the past week. That distinguishes from her cousin, the Red-breasted Nuthatch, who showed up just once back in May 2008.

As with other suet-lovers, these Nuthatches are insectivores and cavity-nesters. Their young are almost totally dependent on animal foods. They also, according to Erhlich et al., sometimes join mixed-species flocks, which can confer feeding advantages as well as protection from predators.

There are a few more I'd like to mention, seen or heard in the immediate area (that is, the area seen in the "views from home" photos). These are the Canyon Wren I heard among the cliffs of Red Rocks yesterday, one of the few bird songs I recognize. (We're working on that; more to report soon.) And last night, wonder of wonders, a new sound in the dark. Husband, then Friends, had reported this, but last night, I heard it, all by myself. Outside in the dark, a sound like a cross between a coyote and a goose... barking overhead, the migrating Sandhill Cranes!

And the mailbox bird? Something gallinaceous. The best I can come up with is Sharp-tailed Grouse, two of them, just meandering along the road. Gone, of course, by the time I returned with binocs and camera.

Great list! Several I've never seen before, including the WC Sparrow, the WB Nuthatch and a couple of the hawks. It's interesting to me that you see different birds in your location which I've never seen in the same place around here in Salt Lake- like Stellers Jay and Western Meadowlark. Very cool.

The Blogger editor will drive you crazy. If you're on Windows, try LiveWriter. Piece of cake, easy formatting, great-looking posts. But if you stick with Blogger, try either repeatedly uploading teh same pic (sometimes works) or rotating 90 degrees first in Explorer, then upload.