Elk in Velvet--and a Surprise 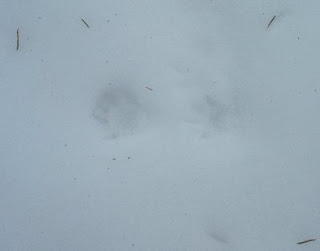 Our Earth Day hike (see following post, actually written first) brought us a few other delights of discovery, mostly on the return trip. Stomping through one of the wet snow patches, I noticed some tracks that didn't belong to us or the dog. Puzzled, intrigued, and grateful we hadn't obliterated them on the way out, we searched for some clear enough to photograph. Here they are, once again without a scale object other than a few Doug-fir needles, but they would have looked nice with one of my Colorado quarters I keep forgetting to bring. 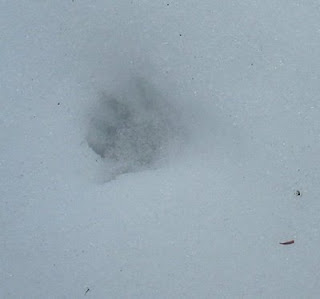 The tracks were too big for the squirrels we had been discussing, too small for a dog and not-quite-right for raccoon, we thought, though there was some resemblance. In the snow, they looked almost like an infant's handprint, except for distinct claw marks. Bee Lady decided on a Pine Marten, and I quite liked that conclusion. It could, of course, been some other small weasel, but we relished the thought of this little guy watching us from a tree while we looked for him. 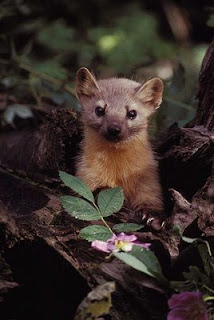 The Pine Marten or American Marten (Martes americana) is the largest weasel we're likely to see in these parts, Fishers being pretty rare, and Wolverines almost nonexistent. Apparently secure in Colorado and several other western states, the Marten is imperiled or vulnerable in Utah, New Mexico, Nevada, California, and Oregon, as well as in most of the northeast. Its broad range, though, makes it globally secure thanks to abundant populations in Canada. (See Distribution map at NatureServe.org.)

Check out the photo—pretty cute, huh? (U.S. Fish & Wildlife Service.) I shouldn't feel too bad about never having seen one—my source says "even people who live in marten habitat may seldom see them." Darling Husband did see one on a hike in the mountains a few years ago. Ours was probably watching from the treetops as we headed back down the trail. 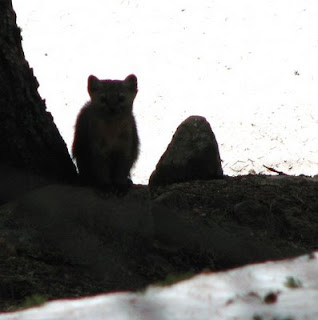 Here are the photos DH took, June 2007, near the trailhead to Gray's and Torrey's Peaks. Brightening to get his face to show up washed out the old snow behind him; not as perfect a pose as the one above. Click to get a better view of him. 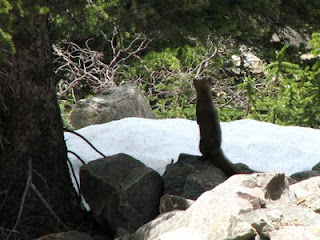 Also a rear view, in typical weasel observation pose, to show off his shape. These guys are about the size of a small housecat. 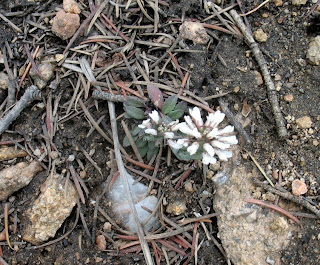 We'd somehow overlooked a couple signs of spring on the way out. First, I spotted this Mountain Candytuft (Thlaspi alpestre), a delicate spring mustard that is easy to miss, usually occurring by itself, scattered along the trail. We saw only this one. 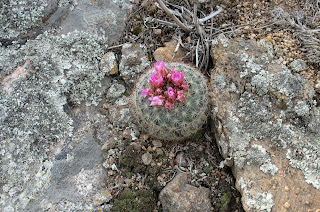 Next up was the one we'd been looking for: the Mountain Ball Cactus (Pediocactus simpsonii). It's a dramatic plant, especially when in flower, but very capable of hiding in plain sight among the rocks and lichens. Often where there's one of these beauties, there will be more, but again, we saw only one blooming. 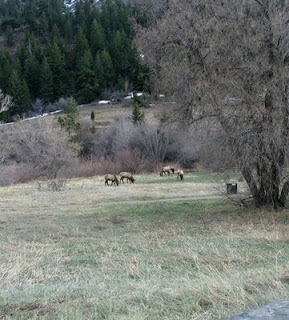 Still with me? If so, you're probably wondering about those Elk by now. We found them again, in a meadow a little further downstream, and took a quick detour for a better look. Five or six, mostly bulls (maybe all bulls, some just too young to show antlers), in the picnic area along the trail. 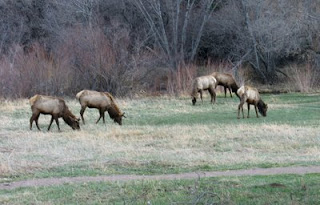 They are just beginning to regrow their annual racks, now just fuzzy protrusions from their foreheads as they grazed. Again, without scale, it's hard to convey how BIG these guys are! Almost 5 feet (1.5 m) at the shoulder, and weighing in the neighborhood of 700 pounds (320 kg), they are twice as heavy as Mule Deer (though they easily look three times!). Somehow, though they're around daily in the mountains west of home, it's still always exciting to see them (at least for those of us who don't have them munching on our landscaping).

So, in all, a great day on our little part of the Earth!

A Little More on Elk

By the final years of the 19th century, when the frontier was not only closed but almost sterilized, Elk had become so rare from overhunting that their conservation became an important effort in the early 1900s. When the bison preserve at Genesee Park was established in 1914 (with bison imported from Yellowstone Park), a couple dozen Elk were brought along to form the nucleus of the herd that still resides there.

The irony is that, 95 years later, the captive herd is well outnumbered by wild Elk (like the ones pictured above) in the foothills west of Denver. Today the species is not only back from the brink of extinction, but so numerous that it is one of the Rockies' most popular game animals with hunters. Elk have even overpopulated habitat in Rocky Mountain National Park to the extent that culling has again become necessary there. An Elk Vegetation Management Plan guided removal that started in February and took about 33 elk (out of 100 planned), all cows. A bit of fertility control is also being tried out on the remaining herd. The program has been controversial, as the following articles show.

It's good to see that they are doing so well. Population control measures are always controversial, but since there are no more predators, I can see why they would be necessary.

I love it ! Very creative ! That's actually really cool Thanks.