A Walk in the Woods

Sorry, boss. Earth Day is a nationwide holiday, and it's on my schedule of days off. And what a lovely (irresistible spring) day it was... Bee Lady and I, along with her dog Jake, just had to get out for a walk in the woods, if only a short one. We chose O'Fallon Park for a section of "hiker-only" trail I hadn't checked out before. Driving up Bear Creek Canyon, enjoying the views, we spotted several Elk in the meadow at Lair o'the Bear, an Open Space park west of Idledale. There's a new beaver dam there, too, but we were not deterred from our destination. 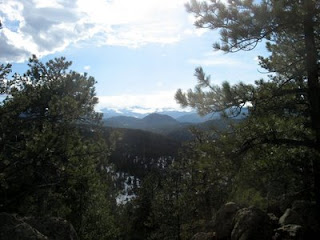 Nor did the surviving snow on the ground deter us. Jake, in fact, reveled in rolling in each patch we slogged through, perhaps easing his old bones. We walked through a slumbering forest of Ponderosa Pine and Douglas-fir, yet untouched by spring, and were soon rewarded with fabulous views of the mountains to the west. The late sun made capturing the mountains a challenge, so you'll have to exercise a little imagination to see Mt. Evans in the distance here. 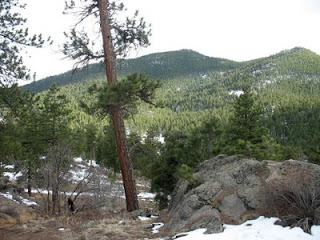 Looking back toward Independence Mountain provided a good view of the north-facing slopes still buried in last week's snowfall. Spring will be delayed even longer there. On our warmer side of the hill, Leafy Spurge and Dalmatian Toadflax (both invasive exotics) were already getting a head start on the natives. 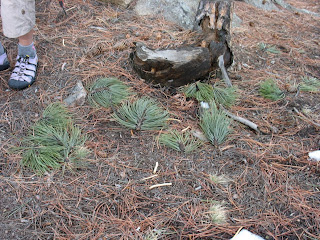 There was even time for an ecology lesson. We saw several trees whose tops had been snapped off by the weight of the wettest snow of the year, so when we noticed many tips of PPine branches laying on the ground, I assumed they, too, were victims of seasonal weather-pruning. 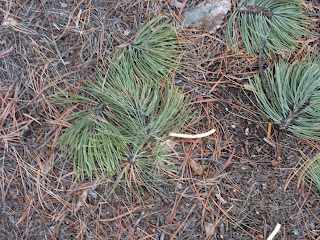 Not so, said Bee Lady. See these bare twigs next to them? This pruning is the work of the Abert's Squirrel1who, instead of caching pine seeds as the Chicarees (Pine Squirrels) do, nibbles on the cambium layer of selected pines. Selective like Porcupines?, I asked. [Those guys choose trees with high sugar(?) content, which are often the ones in the earliest stages of disease or insect attack. It's been reported that Porkies can recognize a sick tree long before any evidence is visible to the forester.] 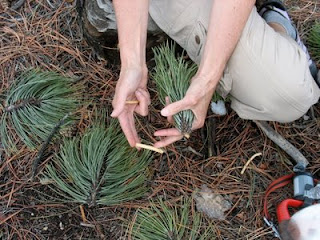 Just so, said Bee Lady as she explained how the squirrels cut pine tips and select twigs behind the growing part, leaving green tassels strewn beneath the tree. She even demonstrated the cambium-munching technique, much like a person eating an ear of sweet corn. (Okay, I probably shouldn't say cambium, so much as inner bark, that is, phloem and cambium, the living parts of a tree stem. The nutrient-free wood, or xylem, is left behind.) The squirrels are selective, it turns out that ecologists just aren't quite sure what they're looking for in the target trees.2 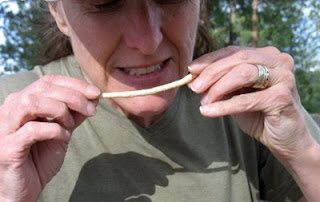 To add to this tangled web of a story, Bee Lady says the Abert's Squirrels must munch certain fungi come June or so to maintain the necessary enzymes (or some such) to digest all that cellulose they'll be eating next winter!

Our short hike seems to have gotten too long for one post, so it's actually continued in the previous post.

——
1Sciurus abertii, but comes in several subspecies too. Thanks to Deb for the squirrel photo link above, better than the one at Wikipedia. There's another nice page on Abert's at NatureWorks.

2According to Marc Snyder, 1992, "The phloem of target trees had significantly higher concentrations of nonstructural carbohydrates and sodium, and significantly lower concentrations of iron and mercury, than the phloem of matched nontarget trees. Oleoresin characteristics associated with selective herbivory were unaffected by simulated herbivory over 2 yr, supporting existing evidence that these characteristics are under strong genetic control. Because herbivory is associated with these host traits and results in dramatic reductions in host fitness, Abert's squirrels are probably important agents of natural selection in host ponderosa pine populations." Yum! Nonstructural carbohydrates!

On the other hand, Pedersen and Welch (1984) found that "Protein and other nutrients did not differ significantly between feed and nonfeed trees. However, both outer and inner bark were easier to remove from the woody portion of the feed tree twigs than those twigs collected from nonfeed trees. Therefore, due to the lack of differences in monoterpenoid and nutrient content between feed and nonfeed trees, we attributed the use of certain trees for use as feed trees to the ease of peeling and separating outer from inner bark."