Fruits of No Labor

Well, almost none (on my part anyway). The Collector put out a plea last fall for someone to take a bucket of fruit off her hands, and I was among the lucky recipients. It took a while to get around to "processing" my bounty; she said the first step was to be sure to use dishwashing gloves to wash the fruit, so first I had to acquire a pair of those. One evening in November, gloves on hands, I undertook the process—first washing and cutting up the glorious purple prickly pears, or tuna, as they are known in the southwest.

FF is not, as I trust you know, a recipe blog, but we're going to make a single exception here, and I hope you'll forgive the digression. Consider it an aberration induced by this unseasonably snowy weather. 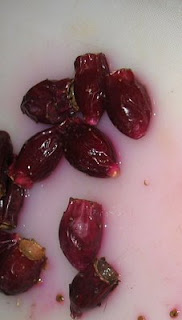 Here they are, all washed, on the cutting board. The Collector assured me most of the glochids would sink to the bottom of the wash bowl as I gently rubbed the fruit in the water, but handling without gloves was still not advisable. I decided, to allow maximum flavor development, to cut each fruit in half. This also provides a small opportunity for an anatomy lesson. 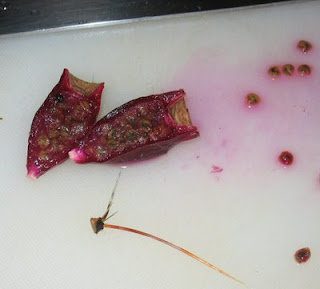 The fruit reflects the flower, of course, and cactus flowers are classic examples of hypogyny. Hypo (below) and gyn (female or ovary) tells us the ovary is below the flower we notice, that is, the showy petals and sepals (tepals) are attached above the ovary. The seeds and fruit will develop below the withered remains of the flower, rather than above, as they do in the tulip. In this photo, the white spot represents the flower base, where it attaches to the main plant. At the other end of the fruit is a tough brown bowl shape that once held the tepals and stamens on its rim. In between is the ovary, full of seeds and surrounded by a thin red-purple layer of fleshy fruit. A few of the mucilaginous seeds are artfully scattered nearby, along with a cluster of spines.

Thankfully, the spines are on the pads of the plant, not the fruits. This one just came along for the ride, adding a little thrill of danger to the processing. 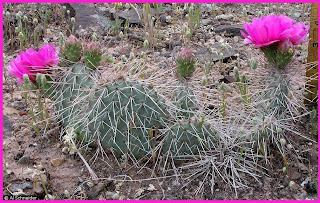 Perhaps this is a good place to point out that not all cactus, nor all prickly pear species, make nice juicy fruits like these. Some, like our cholla, have dried up non-fleshy fruits that are not much use for things like jelly, syrup, or (in the case of our recipe here) cordial. These tuna are from Opuntia phaeacantha, a large-padded prickly pear native to the Four Corners states (AZ, UT, CO, NM) and those bordering them east and west, as well as, for some reason, South Dakota. The species name suggests the abundant and obvious grey or dusky (phae-) spines on this common desert plant. The large pads are often bluish in color; the flowers are more often yellow-orange, only occasionally magenta. [Photo courtesy of and copyrighted by Al Schneider, of Colorado Wildflowers, a great site, by the way; he is also the Colorado Native Plant Society webmaster.] 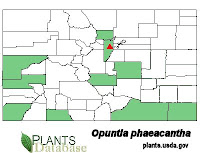 Here's the range map too, from the USDA Plants database, who for some reason call this plant "Tulip Prickly Pear." Better known, perhaps, as Mojave, plains, or desert prickly pear. See also Al's page on this species. 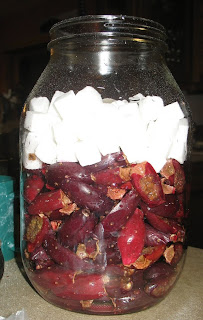 Methods: On to our recipe, or more accurately formula. So easy even I can do it, but the attempt was, for this fruit at least, experimental. Take a jar, any size, and fill it two-thirds full of fruit, topped with one-third sugar cubes. Keep the proportions correct by volume, even if the jar is not full, as here. You must use cubes to assure the volume; granulated sugar would just fall down and fill the spaces between the fruit, resulting in an improper measurement. (As you can see, accuracy is critical, so just eyeball it.) 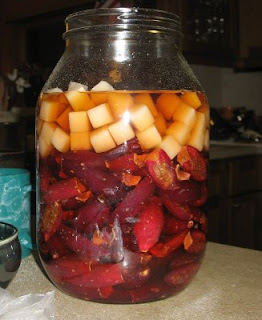 Then fill to the top of the sugar cubes with an alcohol base of your choice, usually vodka (unflavored, please) or whisky (a cheap one is fine; this is not the place for your best stuff). 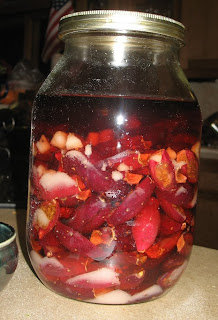 Anthocyanins being what they are, these red and purple pigments diffused into the whisky almost instantly, making a wonderfully cheery solution as the sugar slowly dissolved and settled to the bottom. (Don't add more, your proportions are already set.) 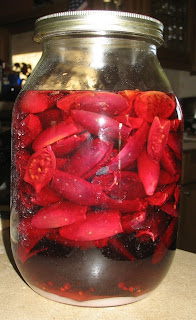 By morning, the sugar disappeared and the fruit had floated to the top. At this point, if your jar isn't full, it would be wise to weight the fruit to ensure it stays below the surface and avoid the possibility of mold. I used crumpled wax paper to fill the extra space and push the fruit down a bit. Cover the jar, but not too tightly. 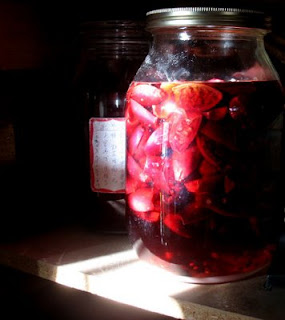 Now comes the hard part: waiting. Several months. Put the jar in a cool dark place (this shot was specially posed, I couldn't resist the shaft of sunlight on the fruit!)... and wait. Time passes faster if you hide the jar away and try to forget it's there.

Then, some day months later, you can decant your concoction and see how you did! I usually filter through coffee filters (muslin or some such would work too), and in this case, that was a challenge! The brew was slower than usual; it took a couple days to persuade a pint or so through. I really didn't want to be sipping glochids, though. When I mentioned the problem to the Collector, she enlightened me: that mucilage around the seeds gives a dense consistency to any juice from this fruit.

Results: The experiment has been deemed a success by several testers. I thought it was a bit of an acquired taste, this prickly pear cordial, but that may have been because of the complex undertones added by the whisky. Next time, I think I'll try it with vodka instead. Vodka might also better preserve the intense red color, which seems to be lost a bit with the whisky base. 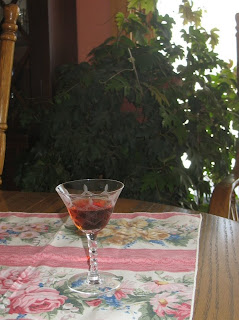 In any event, some snowy Sunday in April, this concoction will deliver a burst of fall flavor more than adequate to toast the past harvest and urge a reluctant spring forward.

Good to hear from you Sally. That looks like an interesting process, and fast!

Maybe I will try it when we move out that way.

I loved this post- botany and cocktails! Thanks for the hypogyny lesson- very helpful.

I agree, vodka should be a good choice. Another- slightly riskier, more potentially more rewarding- choice might be gin. I'd recommend trying either Boodles or Sarticious, both of which have very faint fruity undertones (stronger in the latter) that might complement the tuna.

We're so glad you ventured into recipe-territory! Introducing people to wild foods is always a great way to pique curiosity about nature -- and bringing it into the 'adult' realm by showing how to make a cordial is just the thing to get adults out experimenting with 'tuna' themselves. We're lacking in cacti (we saw one once -- a very small specimen -- while rock-climbing along the St. Croix river), but there are plenty of wild things we might try to adapt this recipe to. Thanks for the great post!

Watcher-- thanks for the tip! If I can get my plant to produce or otherwise acquire more tunas, I'll give it a go next year.

K&R-- Agreed about wild foods-- with care. My first Euell Gibbons type experience was back in 1975 I think! Actually, chokecherry is my favorite for cordial and works really well. You just wash 'em and throw them in the jar... etc. Elderberry's very different, earthy. I showed my niece how to do this, and she's tried orange, peach, strawberry, and others. I'm adverse to paying for fruit for this project, however.

That certainly is a beautiful color--glad you undertook such an intriguing process.

Sally, I followed the link as indicated and I must say that, even not much of a drinker, that recipe should be tried. This year crop is lost, too late for harvesting good quality fruits, but in fall 2010 I will try it with our national distiled plum- based "tzuica" and another batch with vodka.
I am a real hardy cacti freak, check my site- I hope you'll like it:
www.coldhardycacti.freehosting.net

May the new year bring you all health and happiness!